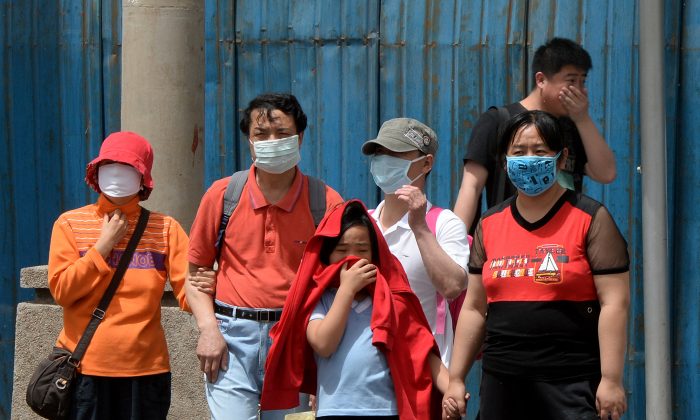 People wear masks to protect against air pollution and dust in Beijing on May 19, 2013. (Mark Ralston/AFP/Getty Images)
Opinion

China: The Dark Side of Growth

Emerging from the ranks of one of the world’s poorest nations to second only to the United States, China is destined for a place in history books. But history may also record the heavy price paid by Chinese people and will continue to pay for years to come.

China’s steady rise against the backdrop of a sluggish global economy has emboldened Chinese leaders to claim firm confidence in their development model. Meanwhile, seemingly robust authoritarian capitalism in China has convinced some American scholars that the model offers a viable alternative to Western-style democracies. According to Asian expert Joshua Kurlantzik, China’s system in many ways poses “the most serious challenge to democratic capitalism since the rise of communism and fascism in the 1920s and early 1930s.”

Contrary to the image of the China juggernaut, though, multiple crises have struck over the past decade. The sheer size of China’s economy and population only highlights the magnitude of health, environment, and social challenges.

Take air pollution. In northern China, readings of particulate matter no more than 2.5 microns in size—or PM2.5, the most harmful types of toxic smog—have reached 40 times the maximum level allowed by the World Health Organization (WHO).

The health consequences of such air pollution are enormous: A 2010 study conducted by the WHO and a group of universities found outdoor air pollution contributed to 1.2 million premature deaths in China, accounting for almost 40 percent of the global total. And according to a recent Deutsche Bank report, China’s air quality will become 70 percent worse by 2025, due to the increases in coal burning and vehicle and industrial emissions, which combined, already contribute to 85 percent of PM2.5 air pollution in China in 2013.

Water pollution is another price paid for China’s meteoric economic rise. As a result of rapid industrialization and poor regulation of the disposal of chemical products, over 70 percent of the lakes and rivers in China are polluted, and nearly 40 percent of those rivers are deemed “seriously polluted.” Nearly one-quarter of Chinese lack access to safe drinking water. The WHO recently estimated that nearly 100,000 people die annually from water pollution-related illnesses in China.

Some 20,000 dead pigs found in the Huangpu River in March added to concerns about food safety regulations. A 2011 study published by Chinese researchers estimated that more than 94 million people in China become ill annually because of bacterial foodborne diseases, of which, about 8,500 people die.

These numbers likely underestimate China’s food safety crisis, because statistics on health conditions caused by tainted food are often excluded. According to a 2011 research conducted by Nanjing Agricultural University, 10 percent of rice sold in China contained excessive amounts of cadmium, and some researchers estimate that as much as 70 percent of China’s farmland is contaminated with toxic chemicals.

The widespread production and consumption of toxic chemicals in industrialization and agricultural production have polluted water and air and contaminated farmland, contributing to the emergence of as many as 400 so-called cancer villages, areas where rates of cancer are unusually high. Overall, China has had an 80 percent increase in cancer rates compared with 30 years ago. Rapid growth has a price.

The economic boom in the past decades has also been associated with a widening wealth gap. According to a report from China’s Southwestern University of Finance and Economics, the Gini coefficient—measured on a scale of 0 to 1 with higher figures associated with greater inequality—was 0.61 in 2010. While it’s not atypical for a fast developing economy to experience increasing inequality, China’s level of inequality is comparable to that of the Philippines and Russia and much worse than that of Japan, the United States, and many countries in newly liberalized Eastern Europe.

Based on the study by Wang Xiaolu, an economist at the independent National Economic Research Institute in Beijing, analysts have estimated that the wealthiest 10 percent of Chinese earned 65 times that of poorest 10 percent. High inequality has increased the danger for China to tumble into the “middle-income trap”—getting stuck at a level of development that falls short of that of more advanced economies. Worse, the government’s failure to address this social crisis may pit the underprivileged against an entitled minority.

The existing sociopolitical crises in China are exacerbated by entrenched corruption. The market-oriented economic transition has created new opportunities and made corruption more pervasive than in previous decades. More than 10 years ago, two eminent Chinese scholars suggested that some 80 percent of Chinese government officials were corrupt, and the situation has not improved.

A conservative estimate by the Carnegie Endowment for International Peace put the cost of corruption in China at about 3 percent of GDP annually, or about $200 billion. Similar to a Greshamite system, which rewards bad behavior, making it rampant and driving out good behavior, China’s corruption has reached a level that touches almost every sector and every member of society. According to a nationwide survey conducted in October 2011, about 82 percent of responders agreed that China has experienced a significant moral decline over the past decade, and more than half of respondents did not think that complying with ethical standards was a necessary condition for success.

In discussing the development paths taken by nations in a March speech delivered in Moscow, President Xi Jinping remarked, “Only the wearer knows if the shoe fits his foot.” As the social cost of development becomes increasingly unbearable, even those who benefited from the rapid economic growth do not think the existing model fits China anymore. When Beijing was engulfed by thick toxic smog in January, an actress born and raised in Beijing wrote: “The flood of emigration and every other type of temptation were not enough to get me to leave this lovable city. Today, this thought keeps circling in my mind: ‘Where will I go to spend my later years?’”

The regime’s call for more confidence in the system is also not echoed by China’s new rich, who vote with their feet by choosing to emigrate. According to a report issued by the Bank of China, 14 percent of those with a net worth of 60 million yuan, or $10 million, have already emigrated, and an additional 46 percent favorably regard relocation. Lack of confidence in the system is also suggested by money leaking out of China. Despite China’s restrictions on capital movement, as much as $3.72 trillion left the country over the past decade.

Clearly, the profound sociopolitical problems are threatening China’s great achievements. Until China can address the immeasurable, if not irreversible social costs of development, it would be next to impossible for the nation to take a leadership role in the international system, what it sees as its rightful position.

It’s hard to imagine, for example, that the country can regain its greatness if the Chinese people do not have clean air to breathe, safe water to drink, or uncontaminated soil on which to live and farm. Thus, it’s imperative to re-examine the China development model and make addressing domestic social-political problems a priority. Unfortunately, the alluring story of China’s rise can blind one to its dark side.

Yanzhong Huang is a senior fellow for Global Health at the Council on Foreign Relations and an associate professor at the John C. Whitehead School of Diplomacy and International Relations.

He is the editor of Global Health Governance and author of “Governing Health in Contemporary China.” With permission from YaleGlobal Online. Copyright © 2013, Yale Center for the Study of Globalization, Yale University.