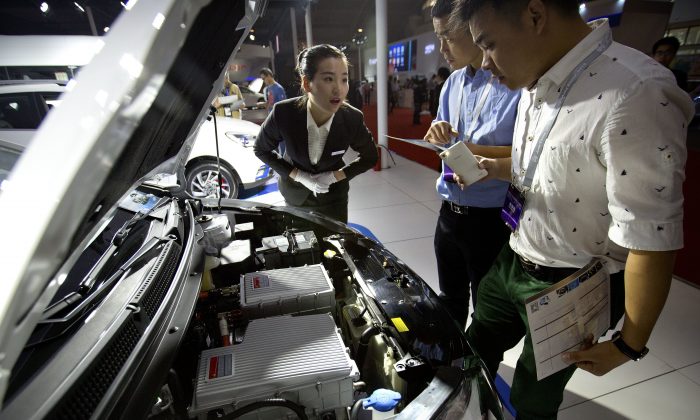 Deep in the Atacama Desert of Chile, chemical company SQM pumps saline brine from underground reservoirs into hundreds of giant rectangular pools. As the brine slowly evaporates, the liquid turns into varying shades of green and blue resembling an artist’s palette.

A liquid called lithium chloride remains, which is shipped to refineries to produce lithium carbonate and hydroxide, vital materials for lithium-ion battery production.

In recent months, Chinese engineers and businessmen have visited the plants, hinting at China’s desire to secure supplies of lithium, a key component for the high-tech industry.

It’s hard to overstate the importance of lithium in the context of current battery technologies. Lithium-ion batteries are efficient and have low self-discharge. They’re the most popular type of rechargeable battery for home electronics, mobile phones, and electric cars.

A remote region in central South America, formed through millions of years of natural leaching from the Andes Mountains, holds one-fifth of the world’s known lithium reserves.

Chile has the world’s second-largest reserves of lithium after Bolivia. Chile has the infrastructure and logistics for lithium extraction that Bolivia currently lacks. Bolivia’s reserves reside on the eastern side of the Andes and mining companies would need to scale the Andes to reach the Pacific seaport, or trek across South America to the Atlantic coast.

A stake in Chile’s SQM—one of the leading producers of lithium, iodine, and potash—is now up for grabs through an indirect shareholder. Oro Blanco late last year invited buyers to bid for its ownership in Pampa Calichera, a Chile-based investment company. Calichera is a major investor in SQM.

China’s CITIC CLSA Capital Markets is said to have a major interest in purchasing Oro Blanco, which put itself up for sale after its owner and SQM chairman Julio Ponce, a son-in-law of former dictator Augusto Pinochet, was forced to resign after scandals, according to a Reuters report.

The groundwork seems to be in place for a potential acquisition by China. Last month, Chile Mining Minister Aurora Williams announced that the country would not block a foreign takeover of SQM.

The competition for SQM is part of a global run on lithium by the world’s largest battery producers and manufacturers of cars and electronics.

The price of 99 percent-pure lithium imported to China has increased 42 percent in the last six months, according to Asianmetal.com, a website that tracks import prices of commodities.

Similarly, the value of lithium and battery producers has increased over the same period. The price per share of Global X Funds Lithium ETF, which tracks the Solactive Global Lithium Index comprising companies engaged in lithium mining, exploration, and lithium-ion battery production, has increased 26 percent over the last three months.

The price of 99 percent-pure lithium imported to China has increased 42 percent in the last six months.

The reason for the increase in lithium prices is twofold.

In the short term, the recent spike in lithium spot price is largely due to a supply squeeze of lithium ore exported to China. The country currently imports much of its lithium extracted from spodumene—a gray translucent mineral with high lithium content—mined in Australia. A joint venture formed by U.S. miner Albemarle and its Chinese partner Tianqi plans to divert more spodumene to battery-grade lithium carbonate and hydroxide production, according to an Economist report. That squeezes lithium ore supply and puts upward pressure on the spot market in China.

Long-term demand is also driving a recent surge in lithium prices, especially from electric vehicle companies. Elon Musk’s Tesla Motors prepares to start production at its battery “Gigafactory” in Nevada later this year. Tesla’s Gigafactory looks to supply lithium-ion batteries for 500,000 cars per year within five years. J.B. Straubel, Tesla’s chief technical officer, has been vocal about securing supplies of not just lithium but other battery materials as well.

Tesla is far from being the only consumer of lithium. According to Benchmark Mineral Intelligence (BMI), a commodities industry consulting firm, China will have twice as much lithium-ion battery production capacity as the United States by 2020.

Currently, nearly 70 percent of global demand for raw materials comes from China, as the country’s major lithium-ion battery manufacturers continue to expand their capacity with the aim of becoming the world’s lowest-cost producer.

BMI is tracking at least 12 lithium-ion megafacilities worldwide, with seven in China and two in the United States. Tesla Motors’ Gigafactory 1 in Nevada is the biggest so far, costing $5 billion and projected to reach 35GWh capacity by 2020.

According to BMI, investments in new lithium-ion battery capacity will exceed $12 billion by 2020.