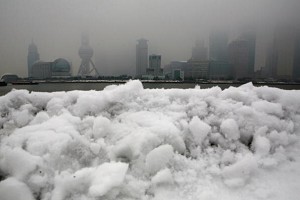 CHINA—The recent snowstorm across southern China has cost at least US$15 billion according to government officials.

The State Council Information Office held a press conference on February 14. Vice Minister of Civil Affairs Li Liguo indicated both the timing of this disaster, the regions involved, and its scale, have caused a major economic loss. The storms hit the mainland during Chinese New Year, the peak travel season at the most populated areas as well as at main distribution regions for transportation, electricity, coal, and many other materials.

Zhang Yuxiang, chief economist and director general of the Department of Market and Economic Information of the Ministry of Agriculture, expressed that agriculture has suffered a loss of historical proportions. The widely affected area, lengthy duration of the snowstorm, heavy snow, and the wide range of agricultural damage have all contributed to the severe loss. Current supply and demand in the marketplace will improve. However, it is not expected that large areas will be out of stock or short of supplies.

The damage to livestock and fisheries is even more severe due to the low temperatures, in particular the loss of piglets, chicks and ducklings. There are more than 69 million livestock deaths; collapsed sheds accounted for many of the deaths.

As for the fisheries, over 9.3 billion square meters of fishery farms are damaged, mainly caused by collapsed greenhouses distributed in 13 provinces in southern China.

Huang Hai, the assistant minister of the Ministry of Commerce indicated the expected impact of the snowstorm will have an effect on some product prices. The price of vegetable oil, in particular, will rise. Huang also said the national reserve supply of meat is now available to serve the market.