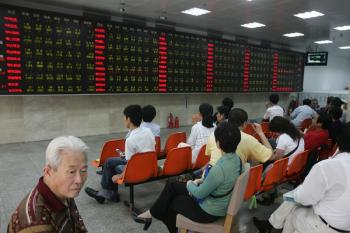 As at August 8, China’s stock market had dropped nearly 60 percent of the peak value it reached in October 2007.

Investors, who had been expecting a boom prior to the Olympics, vented their dissatisfaction on the internet.

“The sharp fall today is a total denial of the Olympics.”

“Under the bubble economy and the panicky stock market, how could the Olympics be succesful?”

“We have already won the ‘fancy diving’ gold metal for the Chinese stock market, congratulations!”

The regime’s mouthpieces have repeatedly sent the message that the market will be ‘stabilized” before the Olympics.

A shareholder from Shanghai commented on a BBS, that the “stabilization” policy is just a “bounced check” which serves the purpose of maintaining social stability before the Olympics and provides opportunities for investment funds, which have government ties, to quit.  “The so-called ‘stabilization’ is effectively an admission of lack of “stability.”