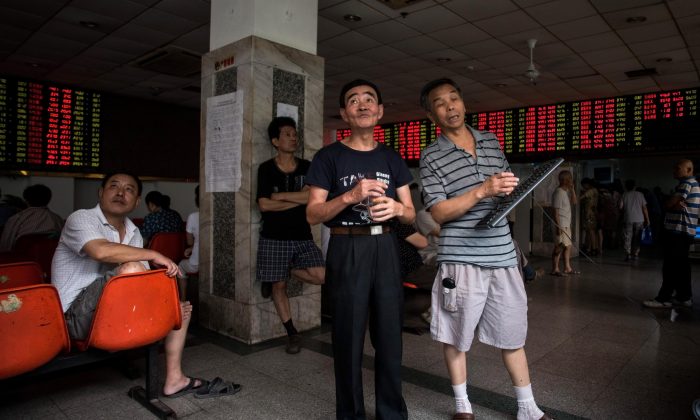 The Shanghai Composite Index (SCI) crashed for a total of 11.5 percent in the week of Aug. 21 , prompting a global equities selloff and a new round of investigations by Chinese regulators into its falling stock market.

China’s benchmark index is down 32 percent from its peak on June 12, despite efforts by Beijing to prop up the stock market over the last two months using such desperate measures as suspending trading, halting IPOs, and forcing banks to increase lending to brokerages.

In denial of the fact that a stock market can, and should, correct itself after becoming overvalued, Chinese authorities convinced themselves that the market cannot be allowed to fall. Put differently, stocks are so intertwined with politics that the Communist Party—which drummed up the market in the first place to enrich and control the populace—cannot afford to let it fall lest it loses all credibility.

I’ve been selling all of my shares, batch by batch, as the stock market and the government’s word can no longer be trusted.
— Ms. Zhuang, Chinese investor

To this effect, one of the most draconian—and amusing—measures introduced by Chinese authorities has been the supposed crackdown on certain “perpetrators,” “malicious” short sellers, and “hostile foreign forces” believed to be behind the market’s fall.

China’s stock market offers a terrific environment for algorithmic trading strategies. High volatility—the SCI saw intraday swings of more than 3 percent on 38 out of the last 60 days—and a base of impulsive retail investors offer opportunities to profit for such traders.

Chicago-based hedge fund Citadel LLC was caught in the web, after authorities suspended an account affiliated with Citadel earlier this month during Chinese authorities’ probe into automated trading practices. While most foreign-based firms rely on the stock-trading portal between Hong Kong and Shanghai to access the mainland market, Citadel is one of a few that have partnered with a local Chinese brokerage to set up trading accounts within mainland China.

Never mind that the CSRC has no jurisdiction over Hong Kong, it reached out to several Hong Kong-based brokerages for trading records of clients to identify those with a net short position in Chinese shares, sources told Reuters.

But the reality is that shorting Chinese shares is almost impossible as shares must be borrowed from approved Chinese brokerages, all of which have been barred from participating in such activities.

Upon being contacted by the CSRC, “we immediately said we have no clients doing ‘naked shorting,’ but they didn’t believe us,” an executive at an international brokerage in Hong Kong told Reuters.

Listening to Party media commentators, one would think “hostile foreign forces” are omnipresent, influencing social, political, and economic policy. “Hostile foreign forces” have been accused of acts such as contributing to the protests in Hong Kong, instigating violence in the Western province of Xinjiang, disturbing peace in the South China Sea, and imposing American values on Chinese people.

In July, Beijing laid the blame of a falling stock market on foreign forces (such as George Soros and Goldman Sachs), ignoring the fact that foreign investors have limited access to the mainland Chinese stock exchanges.

Who are these “malicious” forces driving down the stock market, after all?

An Epoch Times report in July citing scholars both inside and outside of China reported on how some have suspected the recent stock market crash may have been engineered by factions inside China to undermine Xi Jinping.

But perhaps the answer is more obvious than that—Chinese investors are simply cashing out of the casino. Ms. Zhuang, a Chinese national in New York with a sizable stock holding, said “I’ve been selling all of my shares, batch by batch, as the stock market and the government’s word can no longer be trusted.”

The Chinese Communist Party has apparently forgotten the words of its own Mao Zedong. China’s first dictator once famously declared that even the most modern military cannot sustain a prolonged war against guerrillas who have the support of the populace.

Today, the Party’s $150 billion stock market rescue plan seems no match for a populace disillusioned by the market.