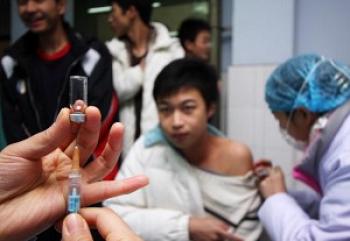 A student is being given the H1N1 vaccine shot. (AFP/Getty Images)
China

Fang Xiao
View profile
Follow
biggersmaller
Print
The official H1N1 death toll in China’s northwestern province of Jilin was two as of Nov. 15, according to the province’s Health Bureau. The real death toll far exceeds that number, according to information from staff workers at the local Center for Disease Control and Prevention (CDC).

One staff worker who did not wish to be identified told The Epoch Times that “estimates of the H1N1 death toll cannot possibly be very accurate.”

“As far as we are concerned, the statistics of H1N1 infection are a secret. We have an obligation to keep it secret. We cannot even tell our parents about it,” said the staff worker, who is based at the CDC in Jilin Province’s Changchun City.

The staff worker further explained that, "Hospitals only test for H1N1 on critically ill patients to monitor changes in the H1N1 virus. Routine testing for H1N1 on less severely ill patients is almost non-existent: Most cases were just treated like ordinary flu, as required by the government. When there is a cluster infection, tests are only run on a few patients, and we don’t do it based on individual requests."

The staff worker also admitted that some of the deaths due to H1N1 infection were not included in the H1N1 death toll since tests were only conducted on critically ill patients. Changchun City’s CDC has also reported cases like this to the Health Bureau, according to the staff worker, adding that, “Whether the Health Bureau will publish the true data or not, we don’t have the right to intervene.”

This staff member’s information corroborates evidence given to The Epoch Times by another CDC staff member a few days ago—that many students have recently contracted the H1N1 virus. Many schools were shut down because of the disease at the time, although some chose not to report the situation, and thus the CDC does not know the exact figure.

An official from the Jilin Province Health Bureau, when contacted by The Epoch Times, said that patients now have to spend their own money to be treated for the H1N1 infection, as the regime has stopped providing coverage since August or September. He refused to comment further.
Zhong Nansha, an academic of the Chinese Academy of Engineering and a noted Chinese medical expert expressed his doubt of the official estimate of the H1N1 death toll in a report published by Guangzhou Daily on Nov. 19.

A Chinese blogger posted an article on China’s famous Baidu Tieba (the Chinese equivalent of Google), stating he suspected that some critically ill patients, including one of his own family members in the Intensive Care Unit (ICU) in Jilin City Hospital had H1N1 infection.