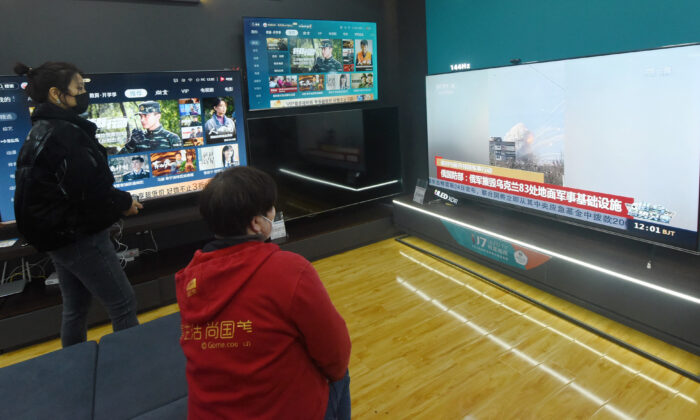 Residents watch a TV screen showing news about conflict between Russia and Ukraine at a shopping mall in Hangzhou, in China's eastern Zhejiang province on February 25, 2022.(STR/AFP via Getty Images)
Thinking About China

China Slips Deeper Into Isolation as Ukraine Crisis Drags On

The US and coalition partners stand up against Beijing's threats

Over the past few weeks, since the Ukraine invasion, the Chinese Communist Party (CCP) has repeatedly warned the United States and its allies about various actions, from exacerbating the Ukraine crisis to defending Taiwan and isolating China.

The United States and Europe, in turn, have warned Beijing to stop threatening the rules-based order and to desist from supporting Russia. The U.S. side is supported by a growing number of countries, while China slips deeper into isolation.

The Quadrilateral Security Dialogue, colloquially the Quad, is a strategic security dialogue between Australia, India, Japan, and the United States.

Washington has recently applied sanctions to Chinese officials accused of repressing Uyghur and other minorities in the form of a travel ban. Beijing reacted by demanding that the sanctions be removed, warning that the United States would face reprisals.

In response, Chinese Foreign Ministry spokesperson Wang Wenbin told reporters on March 24 that “the U.S. statement is full of ideological bias and political lies, discrediting China and suppressing Chinese officials for no reason.”

Dismissing the warning, both the White House and Kyiv have called on China to condemn Russia. The European Union trade chief has stated that the CCP’s refusal to condemn Russia has complicated its relationship with the EU.

President Joe Biden and Chinese leader Xi Jinping had a phone conference on March 18, discussing Russia’s invasion of Ukraine and China’s support for Russia as a possible turning point in the U.S.-China relationship. The meeting ended with no significant conclusion.

On March 24, the United States, NATO, and G-7 allies met in Brussels to coordinate on China. The United States and its allies provide weapons and assistance to Ukraine and hope to drive a wedge between Moscow and Beijing. Furthermore, the allies are preparing secondary sanctions against China for supporting Russia.

Recently, Beijing appeared to be softening its position on Moscow, calling for a ceasefire rather than a military victory, citing the damage the war is doing to the global economy. While Xi pretends not to fear U.S. sanctions, China’s close economic ties to the G-7 countries may be what determines his actions regarding Russia. Increasingly, it seems more likely that Xi will be faced with choosing between economic engagement with either the G-7 or with Russia.

Backing Putin may leave China isolated and something Xi probably does not want. On the other hand, Chinese strategists see backing Russia as the key in opposing a U.S.-led world order.

During their phone conversation last week, Biden continued to threaten sanctions if China were to provide material support for Russia. Xi insisted that he calls for peace talks while the United States undermines the peace process. Xi’s stance appears to be pushing more of the world into the U.S. orbit rather than drawing them to China. The EU is scheduled for a meeting in April, in which it is expected to issue a similar warning to Beijing.

The CCP blames the United States and its allies for the Ukraine war. Vice Foreign Minister Le Yucheng said that the invasion was triggered by NATO’s shift eastward. Le compared this shift to the U.S. pivot to the Indo-Pacific, suggesting that it could “push the Asia-Pacific into a fiery pit.”

This statement was a veiled threat, suggesting that U.S. and Western defense of Taiwan could similarly result in war with China.

Hu Xijin, the former editor-in-chief of state-run Global Times, posted to his 24 million followers on Weibo that Russia is China’s “most important partner.” He lamented that if the United States forced Russia and China to abandon their friendship, China would face a losing battle in a future war with the United States.

A European diplomat said that NATO was drafting a joint communique that will “mention concerns about China’s potential military support for Russia,” according to Nikkei. The Europeans plan to word the communique in a non-threatening fashion, reminding the CCP that standing by Russia could harm the relationship with Europe.

Lithuania’s permanent representative to NATO, Deividas Matulionis, told Nikkei that Russia is the aggressor and those who “support an aggressor then becomes an accomplice of the aggressor.”

Last year, NATO issued a statement affirming that it sees China as a long-term rival, seeing the CCP’s stated objectives and ambitions to challenge the rules-based international order as a threat to global security.

Hu Wei, the vice-chairman for the State Council-affiliated Public Policy Research Center, recommended in a paper that the CCP should make an immediate break with Russia to avoid being isolated from the West. His article has since been removed, suggesting that the CCP disagreed with his stance.

Xi sits in a precarious position. He has enjoyed using Russia as a counterweight to U.S. influence for the last few years. Joining the West in its condemnation of Moscow would mean losing his Russian guard dog. On the other hand, refusing to condemn Russia could alienate China from the West. And finally, as the war grinds on, becoming more costly, there is a possibility that forces within Russia could overthrow or assassinate Putin, leaving Xi holding the bag.