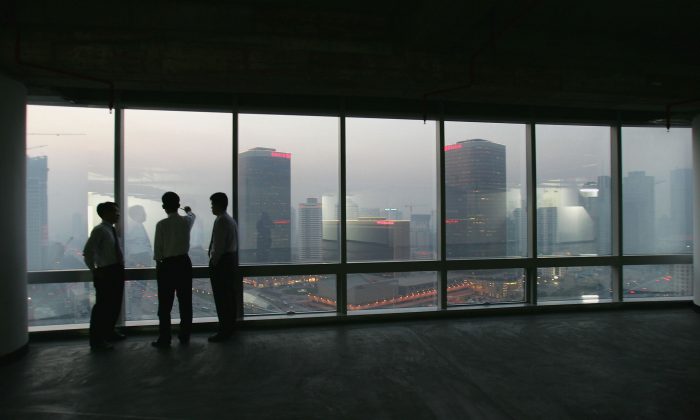 Office workers look out at the Central Business District in Beijing from inside a newly developed office building on Nov. 18, 2004. (Cancan Chu/Getty Images)
China Business & Economy

Faced with a trade war with the United States, China is now setting up a network of think tanks to better understand its adversary.

On July 14, China’s Ministry of Finance set up the “U.S. Research Think Tank Alliance” with research institutes around the country, totaling almost 20 organizations, in an effort to figure out “how to respond to new circumstances and challenges that the U.S.–China relationship now faces,” according to state broadcaster CCTV.

The participants include research branches of state agencies, such as the Ministry of Commerce and the National Development and Reform Commission, as well as university-affiliated research institutes that focus on international finance, economics, and international relations.

The alliance seeks to conduct research on American political and economic trends, U.S. economic policies, and Sino–U.S. relations, specifically to gather intelligence on how to win the trade war.

In an interview with CCTV, Fu Ying, an expert at a think tank under the state-run Academy of Social Sciences, put it thusly: “Since the United States has put the blame and responsibility on China and other countries … the alliance’s most pressing task is to research how to respond to this grim situation.”

Since tit-for-tat tariffs went into effect in early July, China has faced a tough battle. Financial markets have tumbled amid investor anxieties, while some foreign firms with manufacturing plants in China have plans to pull out of the Chinese market, concerned that their bottom lines could be affected by U.S. tariffs.

As U.S. President Donald Trump has threatened to impose tariffs on another $200 billion worth of Chinese goods, China won’t be able to retaliate with the same kinds of tariffs. The country imports only about $115.6 billion in U.S. goods yearly, according to data from the Office of the U. S. Trade Representative (USTR).

Figuring out China’s next steps will be critical for the Chinese economy—and the future of the regime.

But the alliance appears to be interested in other areas, too, such as how to influence the U.S. government and international media.

Speaking to National Business Daily, a Chinese newspaper, Fu said the alliance would like to “provide information on China to international media” so that “China issues can be discussed by Chinese people.”

Meanwhile, Liu Weidong, another expert from the Academy of Social Sciences, who studies U.S. affairs, told South China Morning Post that China should focus on U.S. domestic policies, such as state governments and the issues that will dominate the mid-term elections to be held later this year, which would help China “change Washington’s thinking,” according to a July 17 report.

Such efforts aimed at influencing foreign politics and public opinion in favor of the Chinese regime have long been the responsibility of China’s United Front Work Department. It appears now this research alliance will also play a part.

China’s other battle is in foreign investments. The United States’ punitive trade tariffs were imposed after the USTR found evidence that China was directing companies to make investments in U.S. high-tech firms in order to steal technology critical to the regime’s national interests.

The Chinese regime has instead pivoted to Europe, where Chinese mergers and acquisitions reached $22 billion within the first half of 2018, compared to just $2.5 billion in North America, according to a new report published by market research firm Rhodium Group and law firm Baker McKenzie.

Chinese foreign direct investment into the United States actually fell during the first five months of 2018, according to Rhodium data.

Even in the area of venture capital (VC) investments—where scores of Chinese investors have poured money into Silicon Valley due to loose regulations on foreign investors—the United States has become warier.

Congress has proposed legislation that will grant the Committee on Foreign Investment in the United States—an inter-agency committee that reviews and approves deals—the authority to review minority investments from foreign entities, such as VC funds.

Chinese VC investors have concentrated on hot new technologies critical to the Chinese regime’s tech ambitions, such as artificial intelligence and autonomous driving.