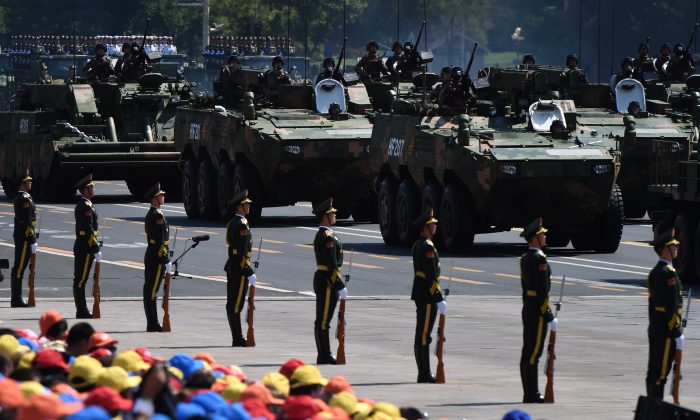 The Chinese regime is going to cut 300,000 troops from its military, and its reasoning is still a bit of a conundrum. While we can’t make any definitive conclusions on what’s behind the decision, evidence suggests there’s much more at play than the bland public reasoning.

The announcement was made by Chinese Communist Party (CCP) leader Xi Jinping during the massive military parade in the center of Beijing on Sept. 3, celebrating the 70th anniversary of Japan’s surrender at the end of World War II.

“Here, I announce that China will cut the number of its troops by 300,000,” Xi said, according to the Party’s mouthpiece Xinhua.

It’s unlikely that it’s about saving money—military spending has been on an upward trajectory for decades, and shows little sign of slowing down.

It also appears to be focused on more than merely slimming down the army—according to proposals for cuts and reshuffling reported by the South China Morning Post, another proposal would reduce the number of troops in the army, navy, and air force from 1,483,000 to around 1,000,000. This proposal would also cut the number of armed police (a paramilitary organization) and internal security forces from 1,460,000 to around 1,000,000. These changes would cut one million personnel from the PLA, and would be completed around 2017.

While these sound like major cuts, China would still have a large number of troops, especially when compared to the U.S.’s 1.3 million.

Most of the cuts would target the army, which would be almost halved. The navy and air force would see more moderate cuts, and a new “Space Force” would be formed under the PLA Air Force command (focused on “military astronautics” and “anti-satellite” warfare).

The simplest conclusion that can be drawn from the changes is that the Communist Party doesn’t anticipate a ground invasion of China, ostensibly the only reason it has retained such a large number of ground troops. And since the air force and navy won’t be too much affected, the changes will have little impact on China’s military push abroad.

Cuts like these may sound familiar. When the United State started its Asia Pivot strategy in 2009, it implemented the “Air-Sea Battle” concept based on the dual assessment that large-scale troop movements are easy targets in today’s wars, and that modern warfare is asymmetrical. Advanced militaries can fight more effectively—and with fewer losses—by focusing instead on warships, aircraft, and Special Operations forces.

Just like with the PLA ground forces, as part of the Asia Pivot, former U.S. Defense Secretary Chuck Hagel proposed shrinking the Army down to its smallest size since before World War II, cutting around 70,000 soldiers.

“Since we are no longer sizing the force for prolonged stability operations, an Army of this size is larger than required to meet the demands of our defense strategy,” Hagel said.

The most important aspect of China’s proposed cuts is what they could do to the People’s Armed Police. Under the proposal cited by South China Morning Post, the paramilitary organization would be completely folded and replaced by a new “national guard.”

This is where politics comes into play.

The People’s Armed Police were controlled by Zhou Yongkang, the Party’s former security czar who was sentenced to life in prison for corruption on June 11. Between 2007 and 2012, Zhou was in charge of the Political and Legal Affairs Committee, which controls nearly all law enforcement organizations in China, including the People’s Armed Police, the courts, the procuratorate, the labor camps, and prisons.

In the political conflict taking place behind scenes, where a faction led by former Party leader Jiang Zemin for years sought to keep its hands on the levers of power, the People’s Armed Police, and its leaders in the Political and Legal Affairs Committee, were among the key tools used by Zhou to put muscle behind Jiang’s group.

By eliminating the People’s Armed Police and creating a “national guard,” Xi may be borrowing a tactic from several former CCP leaders to secure his political control.

Such moves have happened before. Former Party leader Deng Xiaoping cut close to a million troops, but he also created the People’s Armed Police, which number around 1.1 million. Jiang Zemin cut 200,000 troops from the PLA, but also created the 610 Office, a Gestapo-like extra-judicial police force with authority at all levels of the CCP’s system. The 610 Office was created order to carry out his persecution of Falun Gong, and answered to him.

The changes to the PLA are likely to work heavily in Xi’s favor. The military cuts and reshuffling of the PLA will likely allow him to rein in corrupt military officials more effectively, and the folding of the People’s Armed Police will mean he has put his own stamp on reconfiguring the all-important security apparatus that is the guarantor of Party power. The entire reshuffle will also provide further opportunities to ensure that loyalists to the former dynasty are whittled out.