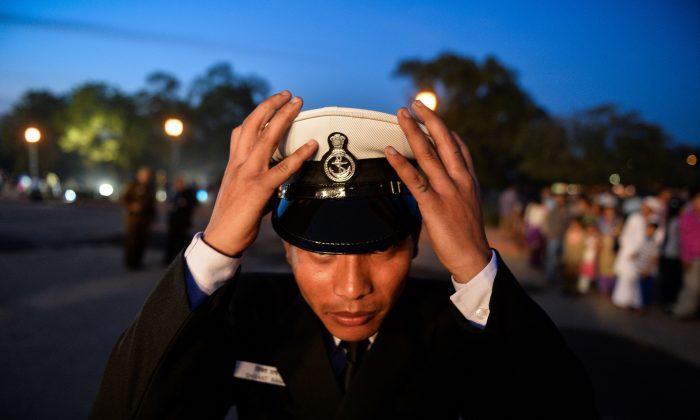 A member of the Indian Navy band adjusts his cap in New Delhi on March 4. Japan and Vietnam are asking India to help counter Chinese aggression in the South China Sea. (Chandan Khanna/AFP/Getty Images)
China

China may have just shot itself in the foot with its efforts to seize new territory. Its recent actions may draw India into the conflict, which could act as an essential piece to sway the situation against China’s interests.

Chinese troops have reportedly been seen at forward outposts along the Line of Control, along the Pakistani side of Kashmir—and this has sounded alarms in India.

Strategically, the timing couldn’t have been worse. This happened right as India’s leaders are considering whether to join the dispute against China’s territorial claims in the South China Sea.

Soldiers from China’s People’s Liberation Army have been making “frequent incursions in Ladakh” in the Himalayas, and Chinese troops may be building infrastructure along the Line of Control, reported The Times of India on March 13.

Chinese troops are also digging tunnels in Leepa Valley in Pakistan-occupied Kashmir as part of its China–Pakistan Economic Corridor that will build a highway from China to Pakistan, and pass under the Karakoram Highway, which India says is being illegally occupied by China.

The Chinese efforts are causing a stir in India, just as India is considering offers from Japan and Vietnam to collaborate on efforts to counter China’s takeover of the South China Sea.

We shall continue to cooperate with other countries including India to exploit resources within our 200-nautical-mile EEZ.
— Ton Sinh Thanh, Vietnam ambassador to India

Vietnam invited India on Feb. 24 to explore and exploit natural resources within its 200-nautical-mile Exclusive Economic Zone (EEZ) in the South China Sea, and didn’t try hiding its intentions of countering China’s efforts in the same area.

“We are determined to protect our rights and maintain regular activities in our sovereign waters,” said Ton Sinh Thanh, Vietnam’s ambassador to India, according to The Economic Times. “Accordingly, we shall continue to cooperate with other countries including India to exploit resources within our 200-nautical-mile EEZ.”

For anyone who has been following the conflict, Vietnam’s request to India has deeper implications.

The Chinese regime placed an oil-drilling rig in waters 120 miles from the coast of Vietnam on May 2, 2014, and sent relations between the two countries into a nosedive.

China removed the oil rig in July 2014 but brought it back in January 2016. Vietnam’s request to India is meant to fire back at China’s efforts.

Vietnam isn’t the only country asking India to help counter the Chinese regime in the South China Sea, either.

India is currently in talks with Japan to help with several efforts in the region—also meant to indirectly (yet without much subtlety) fight back against China’s efforts.

Japan and India are looking to work together on upgrading civilian infrastructure in the Andaman and Nicobar Islands, and may include the construction of a 15-megawatt diesel power plant on South Andaman Island.

India’s entrance into the conflict is likely the last thing Chinese leaders would want.

As The New York Times reported on March 11, the collaboration would mark a shift of policy in India, “which has not previously accepted offers of foreign investment in the archipelago,” and the area has strategic importance in countering China. It states the islands are northwest of the Strait of Malacca and offer control of a “so-called choke point that is one of China’s greatest marine vulnerabilities.”

India’s entrance into the conflict is likely the last thing Chinese leaders would want. Not only are nations around China forming an alliance, but India is also seen as the emerging superpower that could challenge China’s economic ambitions in the near future.

The two countries also have a history of not getting along. Conflicts between India and China have been ongoing since the Chinese Communist Party (CCP) established its dominance over China on Oct. 1, 1949.

India is involved in its own territorial dispute with China over the McMahon Line on the borders of Tibet—after the CCP invaded Tibet in October 1950 and claimed sovereignty over it a year later.

When the Tibetans feel that we do not threaten them with aggression and treat them equally, then we will solve the subsequent fate of this region.
— Mao Zedong

The situation has grown complicated in recent years, but leaked Soviet documents, recently declassified and published by the Wilson Center, give some insight into what actually took place.

Mao Zedong detailed some of his plans during a discussion on Feb. 6, 1949, with Soviet statesman Anastas Mikoyan.

“The Tibet question is very complicated,” Mao said prior to his invasion, according to the translated Soviet document. “In essence, it is a British colony, and only formally counts as China’s.”

Mao had also detailed his plans, saying that after the CCP finished its civil war, “when the Tibetans feel that we do not threaten them with aggression and treat them equally, then we will solve the subsequent fate of this region.”

Declassified documents showed that the Soviets were unhappy with China’s hasty takeover of Tibet, noting that it allowed the Dalai Lama to escape, and its aggression caught the attention of India.

The CCP’s conflict with India, and its disputes with activists for a free Tibet, have been ongoing since then.

This conflict has only deepened with China’s increasing military cooperation with Pakistan.

China is also allegedly planning to build three military security divisions in Pakistan-occupied Kashmir, which The Times of India says will use a local name “so that India does not protest.”

It notes that the new Chinese military divisions will number around 30,000 troops and “will be deployed in and around the installations built by the Chinese firms.” Issues like this have Indian leaders worried, and it’s intelligence such as this that may spur the sleeping giant into action.