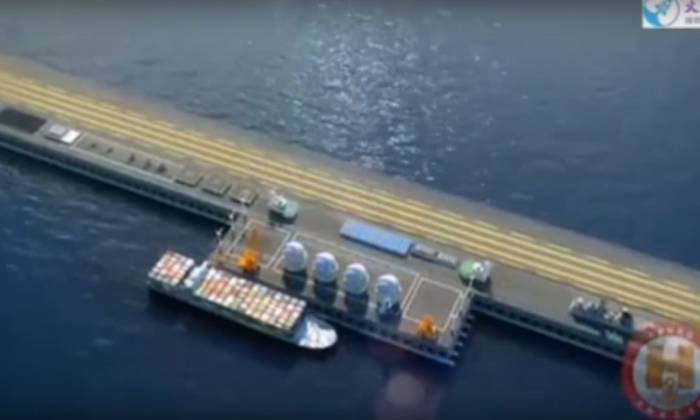 A concept for a “Very Large Floating Structure” mobile sea base is shown in a Chinese promotional video, which was posted online by naval defense industry magazine, Navy Recognition. The mobile base project was recently unveiled at the National Defense Science and Technology Achievements exhibition in Beijing. (YouTube screenshot)
China

An odd project was unveiled at a recent military exhibition in Beijing, showing what could be the Chinese regime’s solution to both its lack of aircraft carriers, and the controversies around its island building programs.

The project is a “Mobile Sea Base” concept, using the fitting name of “Very Large Floating Structures” (VLFS). According to an Aug. 9 report from naval defense industry magazine, Navy Recognition, the Chinese regime’s VLFS project was publicly revealed at the National Defense Science and Technology Achievements exhibition in Beijing.

I poked fun at this project in a previous report, but its implications are actually rather serious.

The Chinese Communist Party (CCP) detailed its global naval ambitions in its May 26 military strategy white paper. It plans to discard “the traditional mentality that land outweighs sea,” according to the white paper, and will begin to “protect the security” of strategic sea lines of communications, as well as “overseas interests.”

“Strategic sea lines of communications” is a fancy way of saying global maritime trade routes, and includes the handful of shipping chokepoints around the world. As I detailed in a recent report, the CCP is hard at work—around all these strategic locations—signing deals that would give it access to, or control of, local ports.

If you were to take the United States as an example, it’s able to have a global military presence thanks to its aircraft carriers and its military relationships with countries around the world, which grant it port access and land bases.

The Chinese regime, on the other hand, has only one very old and rickety aircraft carrier, and while it’s negotiating port access with countries around the world, most of these deals are still around trade, and its warships are still largely unwelcome.

This is where the VLFS Mobile Sea Bases come into play. The CCP’s strategy to close gaps in naval power has so far taken the form of its man-made islands in the South China Sea. These give it stations where its ships can refuel and resupply, as well as airstrips to compensate for its lack of aircraft carriers.

Its use of man-made islands has barely been allowed in the South China Sea, mainly because the CCP has argued it has “historical” sovereignty over the region, and because (at least until recently) it faces very little military threat from the surrounding countries.

In a recent article, I explained that the CCP is likely gearing up for a maritime push into the Indian Ocean. There, its island construction wouldn’t work, not only because neither of the above points would apply to the Indian Ocean, but also because it lacks the reefs and shallow waters that made the CCP’s island building possible in the South China Sea.

Yet, the VLFS Mobile Sea Bases would solve all these problems. Since the bases float, very much like aircraft carriers, they would largely be immune to the legal controversies around the CCP’s man-made islands. And also because they float, they would be usable in the deep waters of the Indian Ocean.

It’s important to note that the VLFS concept isn’t new. According to Naval Recognition, the United States seriously considered building similar structures when it started Operation Desert Shield in 1990. They were called “mobile offshore bases.”

The rationale for the United States, according to Naval Recognition, was that with the structures, the United States “could have a base anywhere in the world in as little as a month,” and the bases could go beyond the capabilities of aircraft carriers to accommodate even very large aircraft like the C-17 Globemaster III.

The Chinese regime is already showing off concepts for the bases. If they decide to build and deploy them in the Indian Ocean, the world will face a situation similar to what’s happening already with Chinese military presence in the South China Sea.