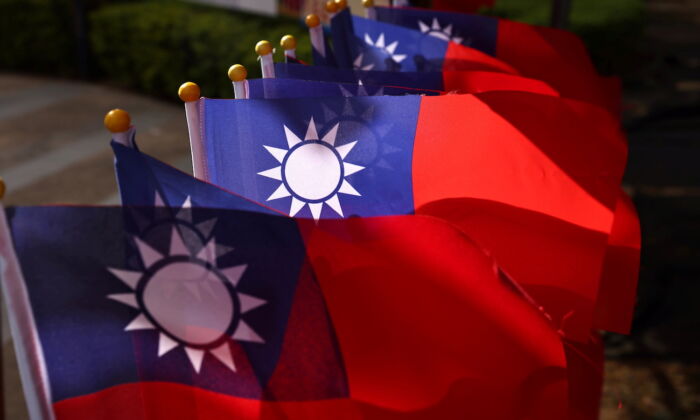 Taiwan flags can be seen at a square ahead of the national day celebration in Taoyuan, Taiwan, on Oct. 8, 2021. (Ann Wang/Reuters)
Taiwan

The Chinese regime is imposing sanctions on seven senior Taiwanese politicians over their support for the self-ruled island’s independence, a move some targeted officials consider to be a badge of honor for a member of the free world.

A spokesperson for the office called the sanctions punishment for the “Taiwan independence die-hards,” according to the official Xinhua News Agency.

The Chinese regime claims the democratic island as its own territory to be taken by force if necessary.

“Their activities became all the more egregious during the visit by Speaker of the U.S. House of Representatives Nancy Pelosi to China’s Taiwan region, further exposing their obstinate nature in seeking Taiwan independence,” Chinese state news agency Xinhua cited the spokesperson as saying.

Pelosi arrived in Taiwan on Aug. 2. Her short stay on the island—about 19 hours—drew a bellicose response from the CCP, which opposed any official exchanges between Taipei and other government officials that might suggest that the island is a de facto nation-state. After Pelosi’s arrival, Beijing launched live-fire military exercises and later several ballistic missiles, which were widely condemned by the international community.

Those sanctioned would not be able to visit China, Hong Kong, and Macau, and firms and investors related to them would also not be allowed to profit in China, the Taiwan Affairs Office spokesperson was quoted as saying by Xinhua.

Several Taiwanese politicians who are on Beijing’s latest sanction list said they are proud to be a target of the communist regime.

Lin Fei-fan, Deputy Secretary General of Taiwan’s ruling Democratic Progressive Party, said it was an honor to be added to the Chinese regime’s sanction list, adding that he has received congratulations from his friends.

“I think that in this era, being sanctioned by an authoritarian regime should be a decoration for members of the free world, and it is very glorious,” he wrote on his Facebook page.

“I would never give up and would be proud of it if I’m sanctioned because I met the U.S. House of Representatives Nancy Pelosi on behalf of the legislature of the Republic of China,” Tsai said on Facebook, referring to the island’s official name.

Wang Ting-yu, a legislator sitting on Taiwan’s Foreign Affairs and National Defense Committee, also described it as a “badge of honor,” adding Beijing has already banned him from visiting China, including Hong Kong, for years.

The seven are in addition to Taiwan Premier Su Tseng-chang, Foreign Minister Joseph Wu, and parliament Speaker You Si-kun who were sanctioned by Beijing last November.

But the sanctions are expected to have little, if any, impact as senior Taiwanese officials do not visit China.

Responding to the CCP’s sanction, Taiwan’s foreign ministry said the island was a democracy that “could not be interfered with by China.”

“There is no way we would accept threats and menace from authoritarian and totalitarian systems,” ministry spokesperson Joanne Ou told reporters in Taipei.

“China is seeking to create chilling effects” among Taiwanese politicians and opinion leaders by leveraging sanctions, but “the results are against its willingness and could only cause resentment for the Taiwanese people,” she added.

The Epoch Times Taiwan Bureau and Reuters contributed to the report.