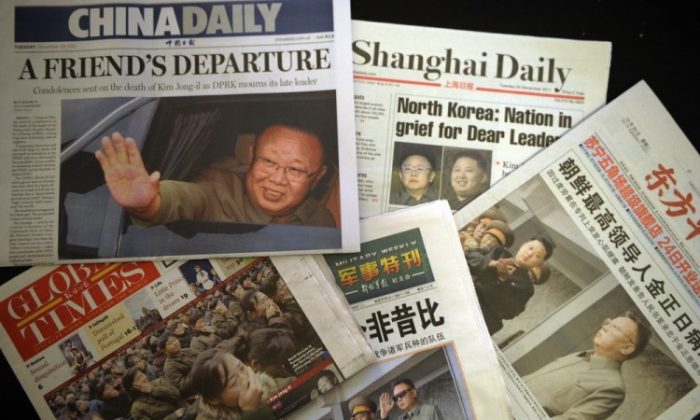 The Chinese Communist Party’s official media responded with appropriate dolefulness to the death of North Korean dictator Kim Jong Il, but appears to wish to quickly usher in his son as a reliable successor.

A series of statements and news reports indicate the CCP’s support for Kim Jong Un, and assert that he has already taken control of the military.

On the front page of the People’s Daily, the flagship propaganda newspaper of the Chinese Communist Party, foreign ministry spokesperson Yang Jiechi was quoted saying that the Chinese regime offers “most sincere condolences and greatest sympathy” for the death of the North Korean despot.

Yang also said that Kim was a “great leader” and a “close friend of the Chinese people.”

Yang said, according to Xinhua, that Kim “dedicated his entire life and rendered his immortal service to the DPRK”s socialist revolution and construction.” The DPRK is the Democratic People’s Republic of Korea, the official name of North Korea.

Chinese media appears to be attempting a delicate balance, however, on the one hand embracing the socialist policies of North Korea—a brutal police state with repressive social controls, partly like China—while emphasizing that Kim Jong Un’s reign will bring economic rejuvenation to the country, a dream that China’s communist leaders have nurtured for decades.

North Korean leaders have lived in luxury while the population starved. But under the new Kim, the policy will be to bring the people’s living standard up so they “eat white rice and meat soup,” in the alleged words of Kim Jong Un, according to Zhengzhou Evening News.

In an attempt to put a bright face on the younger Kim, Chinese media has highlighted his education as an exchange student in Switzerland, and noted that he likes to watch Jackie Chan movies.

But the fun-loving young dictator also gained effective control of the military within two days of his father’s death, according to other reports.

Dubbed the Great Successor in state media, he has carried out “revisions” to North Korea’s military forces, including retiring military officers and installing men loyal to himself, and has already sown the seeds of his own personality cult, according to these reports, by having his image prepared for distribution for the people to hang inside their homes.

An editorial in the Chinese nationalist mouthpiece Global Times was posted prominently on Chinese news portals on Tuesday. Titled “China is a Reliable Supporter During North Korea’s Smooth Transition,” the article says that North Korea is a small country that communist China needs to protect from external meddling.

“North Korea is China’s special strategic partner,’ the article intones, “even though its nuclear issues and so forth give China quite a lot of trouble.” It says that the Chinese regime’s “friendship” with the North adds to China’s stability, and increases its “strategic initiative” in the region.

The article also rebuts domestic critics who oppose the Chinese regime’s constant economic infusions into North Korea, explaining that it’s a small price to pay in the context of the “grand strategy” of “China’s rise.”

Foreign observers have often commented that the last thing the Chinese communist regime wants on its northern doorstep is a united, democratic Korea.

Meanwhile, reports indicate that on the day of Kim’s death the North Korean military test-fired two short-range guided missiles off its east coast. Japan has stepped up its intelligence collection against the North in the wake of the death and transition.