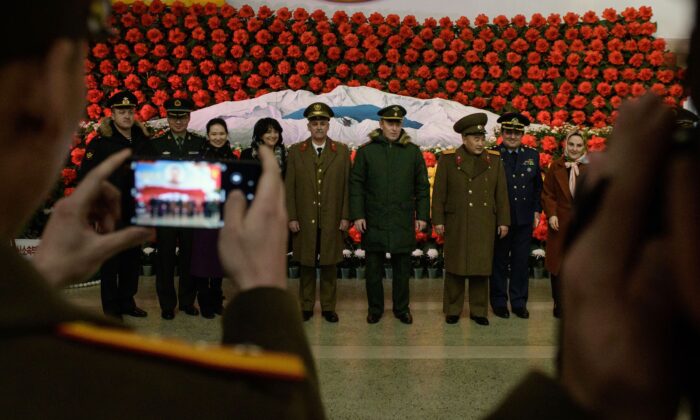 Soldiers from Russia, Iran, and China and North Korea pose for a photo before a display during a 'Kimjongilia' flower exhibition celebrating late leader Kim Jong Il, in Pyongyang, North Korea on Feb. 14, 2019. (Ed Jones/AFP via Getty Images)
Viewpoints

World’s most dangerous nations cooperating against US global dominance

In what is likely to be America’s biggest strategic challenge going forward, a new “Axis of Evil,” to borrow President George W. Bush’s terminology, has emerged on the world stage. China, Russia, North Korea and Iran, are working together to weaken the American-led world order.

A New Threat to the Post War World Order

This recent alignment of rogue nations poses a direct threat to all the strategic, trade, economic and cultural foundations that have anchored the world’s stability and development since the end of World War II. Consequently, the challenge before American diplomatic and strategic institutions, as well as military planners, has now become much more formidable.

That’s largely because, unlike other nations that may not share American or Western democratic values, morals and goals, these four nations are aggressive and actively engaged in wars of expansion, or leveraging the threat of war to do so.

This new fascist axis has become much more evident in the aftermath of the U.S. drone strike that killed the terrorist General Qassem Soleimani of Iran. In a move designed to counter enhanced U.S. response in the region, Chinese defense authorities announced that both China and Russia would be participating in upcoming naval military drills with the Iranian navy in the Indian ocean and the Gulf of Oman.

This isn’t a particularly surprising development, but it is nonetheless momentous, if not ominous. U.S. defense authorities have been aware of the emergence of Chinese-Russian collaboration for at least a couple of years, as the National Defense Summary of 2018 acknowledges:

“The central challenge to U.S. prosperity and security is the reemergence of long-term, strategic competition by what the National Security Strategy classifies as revisionist powers. It is increasingly clear that China and Russia want to shape a world consistent with their authoritarian model—gaining veto authority over other nations’ economic, diplomatic, and security decisions.”

China and Russia especially are becoming much closer, engaging in highly coordinate military drills, harmonizing command structures and even technology transfers. North Korea and Iran are also part of this unfortunate and dangerous collaboration. And yet, there are rational reasons for doing so.

All four nations are regional or global competitors with the United States. But each finds American military and economic power standing between them and their expansionist plans. In fact, all of them are subjected to the dollar-based international financial system controlled by Washington, D.C. and currently under harsh U.S. economic sanctions. The American-dominated financial system and technological and military supremacy has, to differing degrees, limited these nations’ ability to exercise greater regional or global hegemony.

Biting the Hand That Feeds

China in particular has benefitted from the very American-led system that it wishes to overthrow. It has seen its development skyrocket from a poor agrarian nation to the second largest economy in the world and a leader in robotics, artificial intelligence and the bio sciences among other areas.

China’s rapid development came about because precisely due to the United States granting China most favored nation status, allowing it into the World Trade Organization. That was followed by the United States and Western nations investing trillions in capital, factories and intellectual property to China over the following four decades.

Today, China is strategically exploiting its status as a global economic power to militarize the South China Sea and threaten Hong Kong and Taiwan. It is also intimidating its neighbors in an attempt to cast doubt on the U.S. defense guarantees in the region. Those efforts include leveraging North Korea’s nuclear missile capabilities.

Both North Korea and Iran are aggressive rogue states with distinct and destabilizing interests. North Korea has been a client state of China’s since 1950 with the outbreak of the Korean War, and is dependent upon China for food, fuel and other staples. It acts in concert with China’s interests to counter U.S. influence in the region.

In its bid for greater regional and global status, Pyongyang has used its nuclear missile capabilities, including test launching missiles toward Japan, in support of China’s planned ascendancy in the region, and by extension, its own as well. Threatening military action against South Korea and America as well, is also a part of that effort.

Iran, on the other hand, is the world’s most active terrorist state. It has gained significant control over Iraq. With its proxy wars in Israel, Lebanon, Syria, Gaza, Yemen and Saudi Arabia, the rogue Islamic theocracy seeks regional and religious dominance in the Middle East. That includes kicking the United States out of the Middle East, wiping Israel off the map and eliminating Saudis’ control over Arabia. Iran enjoys Russia as a strategic partner and a supplier of arms and military defense systems.

In this new “revisionist” alliance, all but Iran have nuclear weapons and intercontinental delivery systems. Tehran, however, is certainly trying to join that club, thwarted only by the Trump administration. But the similarities in behavior and objectives goes well beyond the nuclear card.

A Gathering of Fascists

All four of these nations are fascist police states, regardless of what they call themselves. Each has an appalling and depressingly long record of mistreating their people for decades and are ruled by singular, dictatorial tyrants-for-life with blood on their hands. The political leadership of each controls the factors of production in order to support their aggressive foreign policies and maintain control over the civilian population.

Notably, Russia, North Korea and Iran, are all economic failures. Russia and Iran rely on oil and natural gas for a majority of their export income. All of them but China lack industrial diversification, high-functioning domestic markets, transparent legal systems and currencies with any value.

China and Russia have the most to lose. Beijing is seeing its dreams of economic primacy collapse under U.S. tariffs. The Chinese Communist Party’s (CCP) legitimacy is fading daily in the face of Hong Kong’s refusal to accept communist rule.

And Russia’s hopes of controlling Western Europe through its monopoly on natural gas sales are all but over. A recent deal signed by Israel, Cyprus and Greece will provide more natural gas at less cost to Europe without the risk of being bullied by Moscow.

All four societies are also retrograde and evil, and seek to impose their dystopian visions upon the rest of the world. This new development doesn’t bode well for the United States or the civilized nations. The historical record of powerful fascist nations teaming up against the democracies of the world is not a pleasant one. (See Germany, Japan and Italy, circa 1939.)

It would appear that this new decade promises more challenges to the world and even less stability than the last.