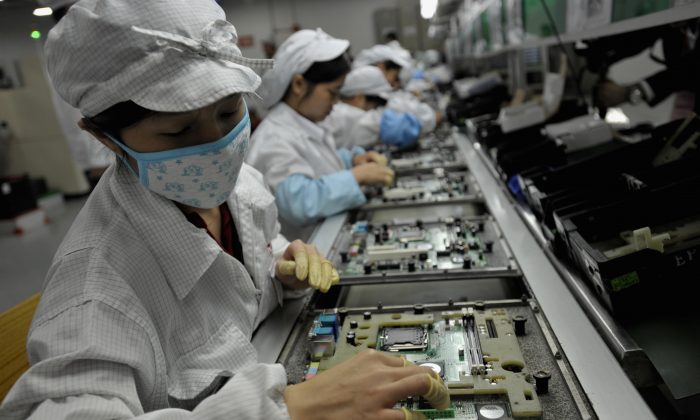 'Made in China 2025' still ongoing
By Annie Wu
biggersmaller
Print

After the United States accused China of unfair trade practices to fuel its own national ambitions of becoming a tech superpower, Beijing has begun to tone down its aggressive rhetoric.

Since the beginning of the trade dispute with the United States, “Made in China 2025,” the plan that Beijing has touted as a blueprint for the country to become a global tech manufacturing hub and no longer rely on foreign tech imports, has been called out as evidence of China’s zeal for stealing intellectual property.

The Chinese Communist Party (CCP) has since instructed state media to omit mentions of Made in China 2025.

Then, in early November, during a press conference after the midterm elections, U.S. President Donald Trump made reference to the plan, saying that “China got rid of their ‘China ’25’ because I found it very insulting.”

Despite recently going quiet, however, the Chinese regime just unveiled figures that revealed it is still very much supporting the hyperactive development of science and technology fields, including the Made in China 2025 plan.

On Nov. 12, Economic Information Daily cited the latest data from China’s Ministry of Science and Technology on state funding for science and tech development.

In total this year, the state provided 12.7 billion yuan ($1.83 billion) in state funding for research and development at 429 organizations, involving “social development, new high-tech, agricultural science” and other fields. Most of the money was awarded to science research institutes, universities, and tech companies, according to the report.

The field that received the most funding was “public safety risk prevention and emergency technology and equipment,” with 55 projects awarded a total of roughly 1.29 billion yuan ($185.4 million).

Another heavy hitter was the development of new energy vehicles—with most projects involved in research on vehicle batteries and electric machinery. Such projects were awarded 1 billion yuan ($143.8 million).

Tsinghua University won the most funding, with 80 projects and 1.8 billion yuan in funding within three years. The public school is considered a state-owned asset management company and a state-financed chipmaker subsidiary company. Semiconductors—chips that power nearly every electronic device—are an integral part of Made in China 2025, as China currently imports most of the semiconductors it needs.

The report also noted that the Ministry awarded funding based on a ratio of 4:4:2 for research institutes, universities, and companies—evidence that the Chinese regime did not wish to support the private sector as much.

Nevertheless, Beijing’s support for tech development is clear. In fact, the report cites an unnamed expert who gave the following analysis: “in the wake of innovation propelling the country’s strategy forward…with assistance from the central authorities’ finances, artificial intelligence, agricultural science, biomedicine research and development, and other areas will quickly expand.”

The Chinese regime is unlikely to give up its tech ambitions anytime soon. This year, Beijing unveiled a new strategy: China Standards 2035, to accelerate efforts to develop technical standards in cutting-edge fields like artificial intelligence, cloud computing, and big data, eventually exporting them to the international market.