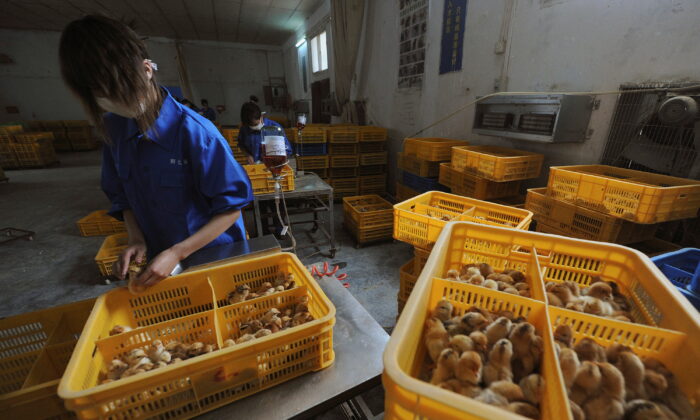 A boy in China has contracted the H3N8 strain of bird flu, which appears to be the first known human case in the world, said the Chinese regime’s health authorities.

The case involved is a 4-year-old boy who had been hospitalized on April 10 in Zhumadian city in the central province of Henan, China’s health commission said in an April 26 statement.

No human infection of this strain has been reported, the agency added.

H3N8 is known to infect horses, seals, and dogs. It is one of the two strains that cause dog flu in the United States, according to the U.S. Centers for Disease Control and Prevention (CDC). It has been detected in dogs across much of the United States, CDC said on its website, adding it hasn’t infected a human.

The commission said that the chances of it spreading among people were low.

“This infection is an accidental cross-species transmission,” read the statement. “There is a low risk of large-scale transmission.”

Though rare, infections in humans can lead to adaptive mutations that potentially allow these viruses to more easily spread in mammals, said Erik Karlsson, deputy head of the virology unit at the Institut Pasteur in Cambodia.

Karlsson said the virus warranted expanded surveillance. He added its implication in the 1889 influenza pandemic, known as the Russian flu, was “a major concern for the risk of the virus.”

China’s commission said an initial assessment determined the variant is of avian origin. It noted there were chickens and crows raised in the boy’s home and that wild ducks were populated in the area.

His close contacts did not show any abnormalities during the medical surveillance period, it added.

The boy developed symptoms including a fever on April 5 and was diagnosed with H3N8 about two weeks later on April 24, according to the statement.

He is in critical condition, according to Hong Kong’s health department, citing a notification from Beijing. The National Health Commission did not mention this detail in the statement.

Last year, China reported a 41-year-old man contracted H10N3, which is also believed to be the first human infection of the type of avian influenza.

In 2021, China has reported 21 human infections with the H5N6 subtype of avian influenza to the World Health Organization (WHO). Though the numbers are much lower than the hundreds infected with H7N9 in 2017, infections leave many critically ill and have resulted in at least six deaths, raising concerns among experts.

“We need to be concerned about all spillover events,” Karlsson said.