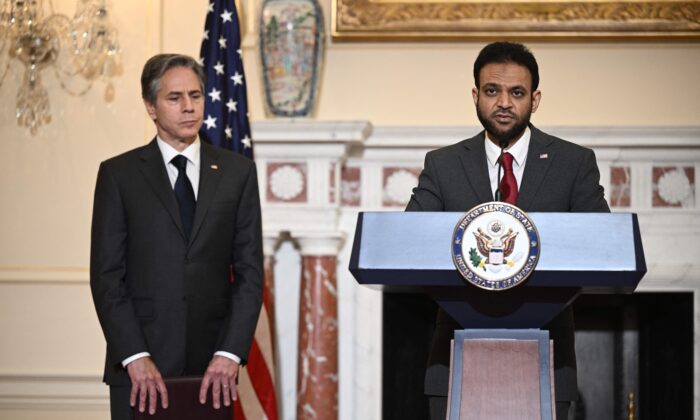 The Chinese Communist Party continues to be a “glaring example” of a regime that represses its citizens from exercising religious liberty, according to Rashad Hussain, the U.S. Ambassador-At-Large for International Religious Freedom.

“Far too many governments remain undeterred of their repression of their citizens. It comes as no surprise that the People’s Republic of China is a glaring example here,” he said in remarks on June 2 unveiling a 2,000-page State Department report on world religious freedom, 140 pages of which are dedicated to China.

The annual report painted a bleak picture for China’s religious believers, who live under constant threat of punishment for exercising their rights, with religious venues shut down and adherents jailed for distributing materials about their beliefs.

Hussain described the far west region of Xinjiang, where more than 1 million Uyghurs and other Muslim minorities are detained in a network of internment camps, as an “open air prison.”

“There are thousands of Uyghur family members—daughters and sons are desperate to know where their parents are, but are terrified of what news they could discover and are wondering whether they will ever be safely reunited,” he said.

Other faith groups are not spared from the heavy-handed suppression either. The communist regime recognizes five religions—Buddhism, Taoism, Islam, Protestantism, and Catholicism—dubbing them “patriotic religious associations,” and forces religious groups to register with these associations in order to hold worship services. A new regulation effective last May requires all religious clergy to swear allegiance to the CCP and socialism, and create a database of “religious personnel.”

“The PRC continues to harass adherents of other religions that it deems out of line with Chinese Community Party doctrine, including by destroying Buddhist, Christian, Islamic, and Taoist houses of worship and by erecting barriers to employment and housing for Christians, Muslims, Tibetan Buddhists, and Falun Gong practitioners,” Secretary of State Antony Blinken said on June 2, referring to the acronym for the Chinese regime’s official name, the People’s Republic of China.

The spiritual practice Falun Gong, which involves meditative exercises and a set of moral teachings centered around the principles, truthfulness, compassion, and tolerance, had an estimated over 70 million adherents in China by 1999, when the authorities launched a nationwide persecution campaign aimed at eradicating the discipline.

Since then, millions of adherents have been detained across prisons, labor camps, and detention centers across the country, where they are subjected to torture, brainwashing, slave labor, and forced organ harvesting.

In May 2021, Blinken announced visa restrictions against Yu Hui, a Chinese official overseeing the persecution of Falun Gong in southwestern China’s Chengdu city. At least one adherent became paralyzed as a result of torture in jail during Yu’s tenure, and another developed a mental disorder, according to Minghui, a U.S.-based website that chronicles the CCP’s campaign against the practice.

Minghui records showed nearly 6,000 counts of arrests and 10,000 harassment cases of Falun Gong practitioners due to their faith in 2021. Among them, 98-year-old Cai Xiufang from northeastern Jilin Province was held for hours in a metal cage for talking to people about Falun Gong.

Over the first six months of 2021, adherents from at least 18 provinces and municipalities, accounting for more than half of China, saw authorities collecting their blood samples and other biometric data against their will, at times breaking into their homes, Minghui reported. Such moves have raised the alarm that the regime may be creating a database for organ matching for potential forced organ harvesting later on.

In 2019, an independent panel of experts concluded that the Chinese regime has been killing prisoners of conscience for their organs to sell on the transplant market on a “significant scale,” an act primarily targeting imprisoned Falun Gong practitioners.

The European Parliament in May passed a resolution expressing “serious concern about reports of persistent, systematic, inhumane and state-sanctioned organ harvesting from prisoners in China, and more specifically from Falun Gong practitioners.”

A separate section in the State Department’s report covering Hong Kong also revealed the shrinking space for religious freedom as the communist regime tightened control in the former British colony.

Eight Falun Gong information booths in Hong Kong were slashed and spray painted in what the group described as coordinated attacks last April. Multiple pro-Beijing lawmakers attempted to outlaw the spiritual group under the city’s sweeping national security law imposed by the CCP. The law, which criminalizes acts the regime deems as subversion, secession, terrorist activities, or collusion with foreign forces, has been used by Beijing to quash dissent in the city.

In June 2021, an unknown group hung banners defaming Cardinal Joseph Zen, an outspoken critic of the CCP, around seven Catholic churches that were planning to hold a memorial Mass for victims of the 1989 Tiananmen Square massacre. The 90-year-old Zen was arrested last month for allegedly contravening the “collusion with foreign forces” provision of the national security law. He has pleaded not guilty and will face trial on Sept. 19.