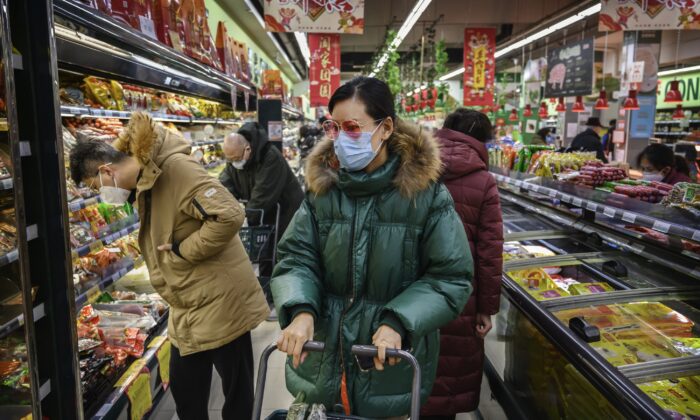 A Chinese woman wears a protective mask and sunglasses as she shops for groceries at a supermarket in Beijing on Jan. 28, 2020. (Kevin Frayer/Getty Images)
CCP Virus

The Chinese Communist Party has declined an offer by the United States to send a group of health experts to China, U.S. Health Secretary Alex Azar said at a press conference on Jan. 28.

The United States conveyed the offer through multiple channels, including Azar speaking to a top Chinese official, but China has so far refused to allow the Centers for Disease Control (CDC) team to assist with efforts to study the 2019 Novel Coronavirus.

“We do hope that the Chinese government will take us up” on the offer, Azar said. “CDC experts are standing by, ready to go to China.”

He told Chinese officials at the press conference, “More cooperation and transparency are the most important steps you can take.”

The CDC team and experts from the World Health Organization (WHO) could help Chinese health workers answer some critical questions surrounding asymptomatic transfer of the virus, or the spread from people who don’t show symptoms to other people, and the incubation period, which is so far pegged at 2 to 14 days.

Officials at the press conference acknowledged Chinese officials have said that the virus spreads from people who don’t show symptoms but said they haven’t been able to see that data.

The teams would also try to obtain more live isolates to help develop therapy and vaccines. American officials are proceeding now as if they’ll have to deploy a vaccine.

CDC and WHO workers are the best in the world, Azar said.

“We basically just need the best public health people in the world working on it right now,” he said.

While urging the Chinese government to accept help from America, Azar noted that he lived through the SARS outbreak and said the level of cooperation and interaction between China and the rest of the world was “completely different” and commended them for that.

The CDC has an office in China, embedded in the country’s CDC.

Azar spoke shortly after the Director-General of the WHO, Dr. Tedros Adhanom Ghebreyesus, spoke with Chinese leader Xi Jinping. A WHO statement said the pair agreed that WHO will send international experts to visit China “as soon as possible” to work with Chinese counterparts.

“Stopping the spread of this virus both in China and globally is WHO’s highest priority,” said Dr. Ghebreyesus in a statement. “We appreciate the seriousness with which China is taking this outbreak, especially the commitment from top leadership, and the transparency they have demonstrated, including sharing data and genetic sequence of the virus.”

Azar, meanwhile, asked about reports that the Trump administration is considering restricting travel to or from China, said it was an option that was being considered.

“It’s important to not take anything off the table with a rapidly emerging novel infectious disease,” he said.

No decision on travel restrictions has been made as of yet.

American experts are examining how quickly the disease can spread and verifying reports from other countries of asymptomatic transmission.

The CDC and the State Department said this week that people should avoid nonessential travel to China.

“This warning is in response to an ongoing outbreak of respiratory illness caused by a Novel (new) Coronavirus (2019-nCoV) spreading between people in many parts of that country,” the CDC said.

“Sustained person-to-person community spread with this virus is reportedly occurring in China,” it said, adding, “A number of travel-associated cases of 2019-nCoV infection also have been identified in other locations, including the United States.”