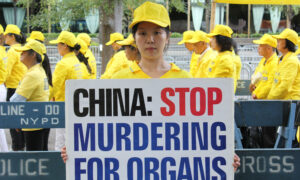 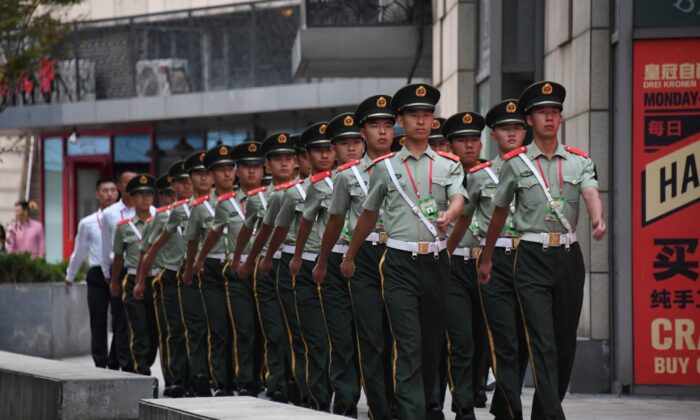 Paramilitary policemen march behind a mall next to the Worker's Stadium, ahead of an overnight rehearsal of a military parade in Beijing on Sept. 14, 2019. (Greg Baker/AFP/Getty Images)
China Human Rights

Beijing has stepped up its suppression of dissidents ahead of the 70th anniversary of Chinese communist rule on Oct. 1.

In preparation for the celebrations, including a 15,000-strong military parade in Beijing, the regime has placed the city in an effective lockdown and tightened control over citizens’ activities in various regions across the country.

Dozens of dissidents, one of whom in his 70s, were targeted by authorities over the past week, according to a Sept. 27 list by human rights group Civil Rights & Livelihood Watch.

“Our whole family is under watch … and can’t leave [home] by even one step,” Jiangsu-based petitioner Qu Hua told NTD, an affiliate of The Epoch Times.

Qu, who had just served seven days in detention for appealing the forced demolition of her house, said she sometimes saw more than 10 cars parked outside her home.

“Every day, there are dozens of people taking turns [watching us],” she said.

Another activist, Wu Lijuan from Hubei Province, said that “security maintenance” personnel started monitoring her around the clock from Sept. 24. They only stopped after she promised not to go to Beijing to petition.

“They have four or five people in every shift,” she told NTD. “I told them I won’t go to Beijing and won’t go anywhere.”

Jiang Tianyong, a prominent rights lawyer based in Beijing, said the regime has turned politically sensitive days into an opportunity to strengthen its control over the populace.

On Sept. 26, four people from the local police bureau visited Jiang, saying it was a required visit in light of the impending anniversary. Jiang said he got into an argument with the police, during which one of the officers called him a “traitor” and threatened to beat him up.

“It’s not only toward me, they do this to many people,” Jiang told the Chinese-language Epoch Times.

“They are afraid that loosening control over me will put them at a disadvantage,” and want to scare human rights lawyers like him into not speaking out, he said.

Jiang added officials from different regions have taken advantage of the crackdowns to deepen their own pockets.

Jiang has been under house arrest in his hometown of Xinyang, Henan Province, since Feb. 28 after serving a two-year sentence for “inciting subversion of state power.”

A group of United Nations human rights experts urged the regime to stop the surveillance and harassment of Jiang in a Sept. 24 statement. They said that the punitive treatment that Jiang has received since his release was “legally unjustified,” and also expressed concerns for his lack of access to medical care.

Jiang’s health has deteriorated since his imprisonment, during which he said he was forced to take unknown drugs. Despite complaints that he was suffering from high blood pressure, memory loss, diminishing vision, and swollen legs, authorities have reportedly denied Jiang’s repeated requests for medical checkups or choosing his own doctor.

Wu said that her landlord asked her to move out in one day, or face being driven out by force without any compensation. At least eight police officers showed up on Sept. 7 to oversee the move.

Footage from the scene showed a police officer warning Wu “not to interfere while they enforce the law.”

Wu, in a later interview with the Chinese-language Epoch Times, called the episode part of the Chinese authorities’ regular activities.

The lawyer previously said she attempted to contact the family of pro-democracy activist Wang Meiyu, who died in custody on Sept. 23 following two months in detention, according to Radio Free Asia.

Before being detained in July, Wang had been publicly calling for the resignation of Chinese leader Xi Jinping. Officials have offered his family 2.98 million yuan ($416,876) in a settlement, according to Hu Guoqing, the lawyer who represents the family.

“For decades, the Chinese Communist Party has been used to harassing citizens at will during sensitive holidays,” Wu said, adding she had “no obligation” to cooperate with them.

Hong Ning from The Epoch Times contributed to this report.