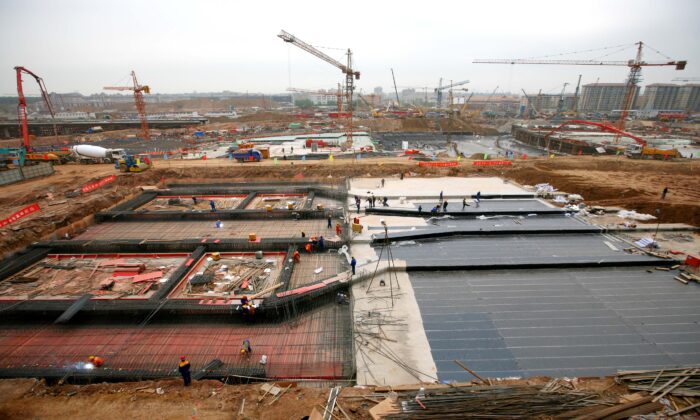 Construction site of the Nanjing South Station of the Beijing-Shanghai High-speed railway line on May 22, 2011 in Nanjing, China. (VCG/VCG via Getty Images)
China Business & Economy

China doubled its investment in major infrastructure projects in the face of downward economic pressure, with total investment exceeding 1 trillion yuan (about $156.8 billion) in early 2022. Given that the country’s infrastructure is close to saturation, such a move might not be effective, a financial source believes.

In recent years, China’s local authorities have been building railroads, highways, and airports. However, “many highways have little vehicle flow, airports have very low throughput, and even commercial complexes in some cities have little business or pedestrian traffic, making it difficult to maintain marginal utility,” Song said.

Marginal utility can be understood as the incremental utility that a consumer receives from each successive unit of consumption of a good over a given period of time, with no change in the number of other goods consumed.

China’s actual demand for infrastructure is almost saturated, while trillions of dollars are still being spent in infrastructure projects this year, Song said.

China accelerated the construction of major projects in 2022 in a bid to stimulate economic growth. According to data from the Bureau of Statistics on April 4, infrastructure investment increased by 8.1 percent in the first two months year-on-year. As of April 7, at least 20 provinces and municipalities have announced the start of major projects, involving a total investment of more than 9 trillion yuan (about $1.4 trillion).

At a major construction mobilization meeting in Lanzhou city, Gansu Province, a municipal governor stressed on Feb. 20 that the city would gather all resources on infrastructure projects, which is defined as “the root of economic and social development’s power and vitality.”

China’s infrastructure investments continued to speed up in April. From April 1 to 8, some 4,385 major projects were launched across China, with a total investment of over 2 trillion yuan ($313.6 billion). Chinese financial media Eastmoney reported on April 9.

In 2008 China introduced a 4 trillion yuan (about $640 billion) stimulus plan, which was mainly for infrastructure development. Additional funds in the later stages eventually totaled 30 trillion yuan ($4.8 trillion) and up, according to Song.

Other than large infrastructure projects, Song believes consumption can boost China’s economy. Whether a country’s economy is good or not depends on the level of consumption.

Shanghai might be one of the latest examples of a stagnant economy due to the stringent zero-COVID measures. An April 10 report in Chinese official media admitted that under the requirements of epidemic control, activities and movements of people within and across Shanghai, the number one consumption city in China, have dropped significantly, which had a great impact on congregating and contact consumption, with the service, tourism, and catering industries all facing a dilemma.

In 2021, Shanghai saw total retail sales of consumer goods of 1.8 trillion yuan (approximately $288 billion), 1 percentage point higher than that of the whole country, ranking first of all cities in China. But in 2022, it would be impossible for the megacity to maintain its economic leadership.

China’s economic data for the first quarter will be released soon, but it will not fully reflect the impact of the pandemic outbreak, Song said.