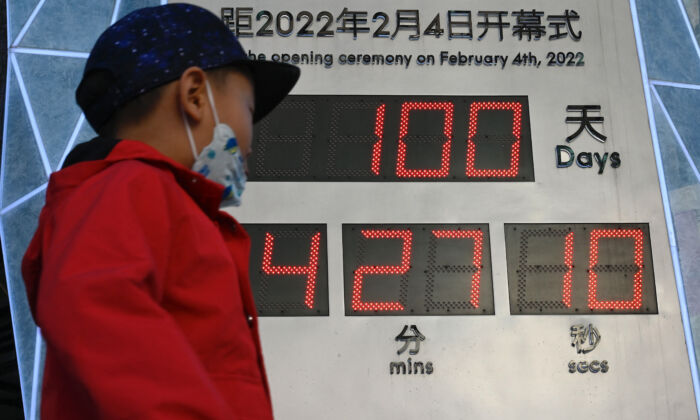 A child walks past a countdown clock showing 100 days until the opening of the 2022 Beijing Winter Olympics Games, at a shopping mall complex in Beijing on Oct. 27, 2021. (Jade Gao/AFP via Getty Images)
INSIDE CHINA

Beijing has scrambled to tighten travel restrictions and expand vaccination campaigns in an effort to crush rising COVID-19 infections; as the 100-day countdown to the Beijing 2022 Winter Olympics begins, an official says the outbreak poses the biggest challenge.

Beijing is at a critical stage of controlling COVID-19, Pang Xinghuo, vice head of the Beijing Center for Disease Prevention and Control, said at a briefing on Oct. 27.

As of Monday, China has reported nearly 250 locally transmitted cases in the recent outbreak, with 21 in Beijing and 110 in Inner Mongolia, a region neighboring the capital.

The figure is likely to not reflect the true total, given the regime is known to grossly under-report its virus numbers.

Nevertheless, authorities have been on high alert as most of the infections have cross-region travel histories.

The first two confirmed cases of the new wave, a couple from Shanghai, had traveled through northwest China by car and flights during a peak tourism season at the beginning of October. They tested positive for the CCP (Chinese Communist Party) virus on Oct. 17.

The recent COVID-19 outbreak, the disease caused by the CCP virus, has spread to 11 provinces and the capital Beijing in ten days.

“Controlling the virus is really the biggest challenge we face in hosting the Winter Games,” Zhang Jiandong, a senior official with the Beijing Organising Committee for the 2022 Olympic and Paralympic Winter Games, told reporters on Wednesday.

Beijing is scheduled to host the Games from Feb. 4–20, and the Paralympics from March 4–13.

The 100-day countdown to the Games pressured the government to impose tougher virus restrictions, as cases continue to rise amid a high vaccination rate.

Beginning this week, Beijing’s authorities will bar people who have been to areas with infections in the previous 14 days from entering the capital. There are no exceptions, even if they are Beijing residents.

The senior police official gave five typical reasons, including breaching stay-at-home orders. A resident was arrested on Oct. 23 for allegedly beating a community staff member as he was trying to leave his residential compound.

Meanwhile, the capital city has begun to roll out booster shots since Oct 22, as the regime pledged to host a “simple and safe” 2022 Games.

More than 80 percent of adults in Beijing had been fully vaccinated in July. For those aged 12–17, over 80 percent had received at least one dose in August.

The city’s health authorities blamed the Delta variant for a rise in infections spanning three districts in the capital on Wednesday.

China announced on Monday that children as young as three years old will start to receive Chinese vaccines. However, the three approved vaccines for those aged 3 to 17 are still in clinical trials. There is also no definitive answer about their protection levels against the highly infectious Delta variant.

In addition to the flare-up of COVID-19, the regime has faced growing international calls to boycott the games in protest of the regime’s human rights record.

During the torch-lighting ceremony in Athens earlier this month, rights activists unfurled a banner reading “No Genocide Games” and waved a Tibetan flag, although the ceremony itself was not interrupted.

Rights groups and some U.S. lawmakers have called on the International Olympic Committee to postpone the Winter Games and relocate the event unless China ends the ongoing genocide against Uyghurs and other Muslim minority groups.

Activists and U.N. rights experts have said that at least 1 million Muslims have been detained in camps in China’s far-western Xinjiang since 2017, an allegation denied by the communist regime.

While no country has said its athletes will boycott, European, British, and U.S. lawmakers have all voted for their diplomats to do so.

Reuters and Eva Fu contributed to this report.