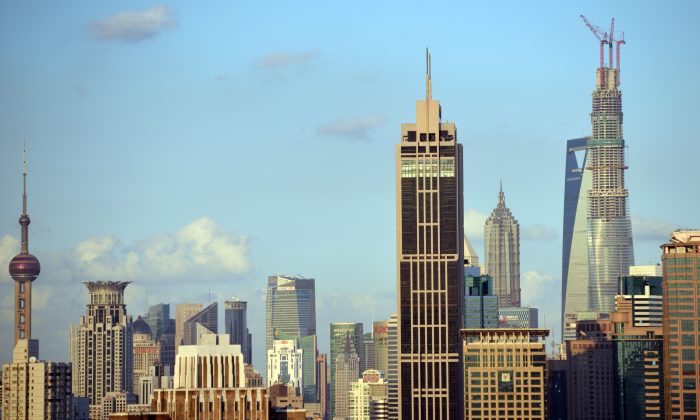 Commercial and residential property in Shanghai on Sept. 30, 2013. Chinese officials are attempting to bolster demand in the real estate sector as the market seems to face an inevitable decline. (Peter Parks/AFP/Getty Images)
China

To combat a growing lack of confidence in China’s real estate market, local governments are loosening restrictions on who can buy houses, offering incentives for those who do, and winding back previous price controls.

Communist Party media has also begun to talk up the market’s latent potential, in an apparent attempt to bolster confidence in housing prices.

But across China, real estate developers are scrambling to get rid of inventory, resorting to unorthodox sales techniques that suggest a deep concern about the future.

A collapse in real estate prices would be catastrophic for the Chinese economy: the vast majority of Chinese wealth is tied up in housing, and the real estate industry has been the locomotive of growth for at least a decade.

In mid-level cities across China—which are still enormous by global standards—officials have wound back restrictions that have been in place for some years, in order to get people to buy more houses. Such measures are known in Chinese as “jiushi,” or “saving the market.”

Wuhan, a transportation hub in central China on the banks of the Yangtze River, has encouraged college students to move there to study. They can obtain a local residency permit once they graduate, gain local employment, and crucially, purchase a home, the new policy says.

Official residency status in Chinese cities is controlled by the government through what it calls the “hukou,” or household registration system, which acts as an internal visa or passport mechanism inside China.

People born in the countryside are relegated to rural hukous. Without a city hukou, they become second-class citizens upon moving to a city, unable to send their children to school or buy apartments or cars.

Other cities have dangled the promise of local hukous in exchange for a purchase of housing, according to Xinhua, the official Chinese news agency.

The city of Wuhu in central China’s Anhui Province has canceled the restriction on college graduates needing to complete three years of full time work before they receive subsidies for a first home purchase.

Zengcheng and Conghua, two second-tier cities in Guangzhou Province, have also started unwinding restrictions on house prices, credit, inventory, and purchaser identity, which had been added in years past in an attempt to stop a runaway housing market from becoming destabilizing.

Because restrictive economic policies that are an essential part of the Chinese regime’s model for economic growth have channeled a large portion of household income into housing, even minor changes in policy, amplified by China’s vast population, can have an immediate and significant effect.

But such measures may be at best a temporary salve. Signs of a seemingly inexorable slowdown are everywhere.

Deutsche Bank AG said in a June 13 report, according to Bloomberg, that only after cutting prices by 10 to 15 percent, were developers able to achieve an acceptable volume of sales.

Official data shows that from April to May, home prices declined in 35 of 70 cities, a dip not seen since May 2012.

The prices of stock in major Chinese real estate companies listed in the United States have also stumbled this year, with SouFun, a major real estate website, losing 25 percent of its value in June, and E-House China Holdings Ltd., a Chinese property broker, dipping 13 percent.

The Shanghai Stock Exchange Property Index has dropped over 6 percent this year, reflecting the fortunes of the two dozen real estate companies it tracks.

Li Junheng, an analyst of the Chinese economy with Warren Capital based in New York City, said in a recent newsletter that the “biggest cities including Shanghai are seeing price reductions both inside and outside the Inner Ring Road by 2–3 percent and 8–10 percent respectively.”

The newsletter also said that the slowing economy has led high-end retailers to stop opening new stores in shopping malls, while major real estate projects are discounting to the tune of 50 percent. Even the ever-confident VIP gamblers who travel to Macau’s casinos have slowed to a trickle.

“We think that the market dynamics are significantly different from 2008-09 … and 2012 … in that the market is seeing a fundamental and structural surplus and low consumer sentiment,” she wrote.

Taking to the Internet

People’s Daily, the mouthpiece of the Communist Party, has gone on the defensive about the tweaking of real estate policies.

Actually, this is all part of “normal adjustment,” the paper said, setting down the Party line on the politically correct way of looking at the real estate market.

Other officials have been more sober. Pan Gongsheng, the deputy chair of the People’s Bank of China, said during a recent forum that, according to paraphrased remarks, if a country’s people primarily stores their wealth in real estate, it might bring many problems to economic development, leading to a real estate bubble that bursts and brings an economic crisis.