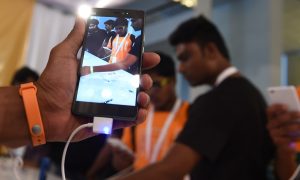 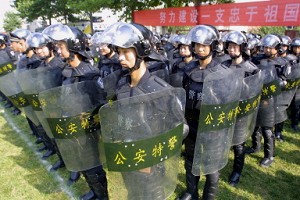 Chinese riot police perform at a demonstration in July. China&#039s President Hu Jintao has urged the police to further maintain stability, at a time where there are an average of over 200 protests and riots every day. (AFP)
China

BEIJING – About 800 policemen clashed with armed villagers during a pre-dawn raid and arrested 47 people in southern China after residents resisted a crackdown on illegal mining and went on a rampage, a newspaper reported on Friday.

It did not say if any policemen or villagers were killed or injured.

The local government launched a crackdown on illegal mining in June after villagers polluted Hejiang river by dumping waste water into it, the newspaper said.

Villagers went on a “beating, smashing and looting” rampage, the newspaper said without elaborating.

Land disputes, corruption, abuse of power and a widening gap between the rich and the poor were among the reasons leading to the number of protests shooting up to 74,000 last year from just 10,000 in 1994, a Hong Kong newspaper reported last month.

The number of people involved in those demonstrations jumped to 3.76 million in 2004 from 730,000 a decade earlier, the Beijing-funded Ta Kung Pao quoted Public Security Minister Zhou Yongkang as telling parliament&#039s top advisory body.

Last month, the People&#039s Daily called for perceived threats to stability to be crushed. “Destabilising factors must be resolved at the grassroots and nipped in the bud,” the mouthpiece of the Communist Party said in an editorial.