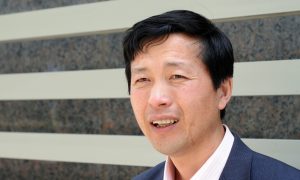 China’s domestic news coverage of the recent Qingdao oil pipeline explosion is tightly controlled by the Chinese Communist Party (CCP) which censors the content media receives, how it is published, and even where to place the story in the publication.

News coverage on the Qingdao oil pipeline explosion on Friday is rigorously framed by the CCP’s Central Propaganda Department, reports China Digital Times, explaining censorship instructions are issued by government authorities for all media, and are frequently leaked and dispersed over the internet.

In the case of the pipeline fire, media were instructed on Nov. 24 to strictly control the direction and content of information about the explosion. Media were told not to send reporters to the scene, and to use only “authoritative information issued by the departments handling the accident.”

Central Propaganda Department’s directive added that media were to refrain from speculation or exaggeration, guess at the cause of the explosion or conjecture who might be responsible for the accident. Media outlets were also forbidden to print overviews or background information on previous accidents.

Earlier this month, the Propaganda Department similarly strictly controlled news about an explosion at a Xinjiang liquid ammonia plant, which killed six in Urumqi. The authority ordered media to delete early news reports about the incident from all websites, and forbade all independent investigation.

“Do not put the story on the front page or website homepage”, media was instructed in the case of last month’s Jeep explosion in Beijing’s Tiananmen Square, which authorities called a terrorist attack. The story was tightly scripted, and media outlets were reminded to downplay the story and to “report the story in strict accordance with Xinhua News Agency wire copy.”

The Propaganda Department prohibited photos of the incident, and instructed media to strengthen monitoring of their staff’s social media accounts to prevent leaks of unauthorized information.

Reporters Without Borders said that in addition to the arrests of foreign reporters and the destruction of their photos, the police put screens around the burnt wreck to conceal it. Early news stories simply referred to the incident as a “traffic incident,” if there was any mention of it at all, they said.

China Digital Times, which is based at the University of California, reports that Chinese journalists and bloggers often refer to the commands from the Central Propaganda Department as “Directives from the Ministry of Truth.”