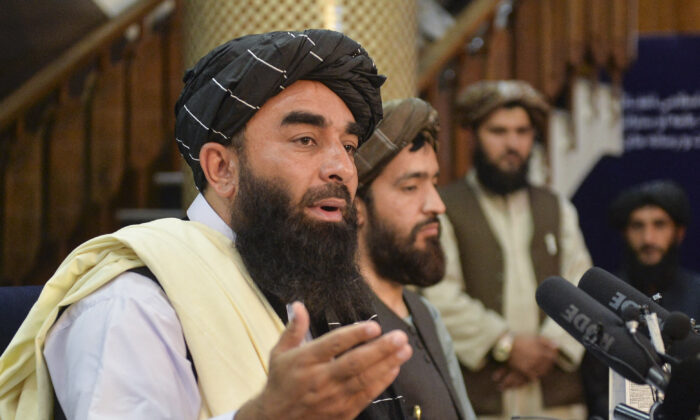 Taliban spokesperson Zabihullah Mujahid (L) gestures as he speaks during the first press conference in Kabul, Afghanistan, on Aug. 17, 2021. The Taliban wants stronger China relations as it is back in power in Afghanistan. (Hoshang Hashimi /AFP via Getty Images)
Thinking About China

China-Pakistan Nexus in Afghanistan: A Worry for India

Pakistan’s support for the Taliban is not surprising. The international community needs to take stock of Pakistan’s moves in the Taliban-led Afghanistan, and to observe how the Pakistan-China nexus will be played out in the war-torn country.

The nexus is already taking root in Afghanistan as witnessed in the coordinated efforts between Islamabad, Beijing, and the Taliban. That is, while Pakistan called the Taliban’s takeover of Kabul “breaking the chains of slavery,” China has endorsed the new “interim government” of the Taliban by calling it a “necessary step” to restore order and “end anarchy.”

Furthermore, on Sept. 8, the Pakistani government led the initiative of organizing a foreign ministers’ meeting on the Afghan issue, which was attended by China, Iran, Tajikistan, Turkmenistan, and Uzbekistan. At the meeting, China announced that it would donate 200 million yuan ($31 million) worth of aid, including grains, winter supplies, and COVID-19 vaccines to Afghanistan. Speaking to the G20 foreign ministers via a video link, Chinese Foreign Minister Wang Yi urged for humanitarian assistance to Taliban-controlled Afghanistan without any delay. Besides, Beijing has also expressed its interest in starting investment projects in Afghanistan when the situation becomes conducive.

While China has been quick to make its strategic moves in the war-torn country, it is still too early to gauge how China’s clout will play out in Afghanistan. However, what remains certain is that Afghanistan, under the Taliban, will become the new frontier of the Beijing-Islamabad nexus—further broadening the scope of the ties. This brings the “all-weather friendship” between China and Pakistan into perspective—India’s major concern.

India has always been wary over the “all-weather” ties between China and Pakistan. One of the key factors that bind Beijing and Islamabad is their common interest in the context of sovereignty and territorial dispute with India. This is exemplified by the China-Pakistan Economic Corridor (CPEC), the flagship project of China’s Belt and Road Initiative (BRI, as known as “One Belt, One Road”) that connects the port city of Gwadar in the province of Balochistan with the Chinese city of Kashgar in the landlocked Xinjiang region. The CPEC violates India’s territorial sovereignty as it passes through Pakistan-occupied Kashmir (PoK). However, Beijing dismisses New Delhi’s sovereignty concerns by arguing that the CPEC is an economic project and not aimed at any third country.

With the Taliban back in power in Afghanistan, India will have to face new dimensions of the so-called “two-front” scenario—the Taliban’s ties with China and Pakistan. This situation can be read in three ways. First, the extension of CPEC to Afghanistan will further add to India’s dilemma over Chinese intentions along India’s periphery. Second, China’s increasing affinity with the Taliban will provide a boost to Beijing’s interest to mediate between Afghanistan and Pakistan. And third, if Beijing succeeds in its role, it will try to export the “China model,” which will not be in India’s interest. While Pakistan has always been a concern for India regarding the Taliban, the added China factor will only make matters worse.

Therefore, India’s anxiety over Afghanistan is not just about the Taliban. To quell the risks, India held its first diplomatic talks with the Taliban this month and made it clear that “Afghanistan’s soil should not be used for anti-Indian activities and terrorism in any manner, according to the Ministry of Affairs.

As the uncertainties loom large, New Delhi would have to make difficult and uncomfortable decisions to secure its interests in the Taliban-led Afghanistan. And more specifically, to counter the “all-weather”ties  between China and Pakistan as both countries’ interests in Afghanistan have an India quotient.