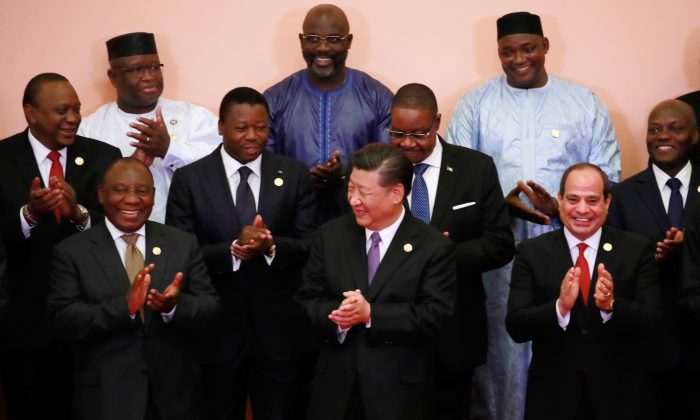 Today, however, millions of people across the globe still live under colonial rule. Some will scratch their heads and ask how, but it’s important to note that colonialism looks a little different today. It’s less explicit, less violent, and less obvious.

In Africa, let’s call it “colonialism with Chinese characteristics.”

The Chinese Communist Party (CCP) is busy constructing bridges, ports, roads, and state-of-the-art facilities in Africa. These projects come with a significant price—and that price is freedom.

Of the 54 countries in Africa, 45 have already signed up for the Beijing regime’s Belt and Road Initiative (BRI). In early 2021, Congo became the 45th African member of the BRI. Shortly after signing on the dotted line, the largest country in sub-Saharan Africa entered into an “unconscionable” mining deal with Beijing. Congo is the world’s leading producer of minerals such as cobalt and copper.

The BRI saddles its members with unimaginable levels of debt. In November, The Diplomat’s Mercy Kuo wrote that since the BRI was launched in 2013, “China has outspent the U.S. on a more than 2-to-1 basis.” However, it “has done so with debt rather than aid, maintaining a 31-to-1 ratio of loans to grants.”

To compound matters, Kuo found “that the average [recipient] government is now underreporting its actual and potential repayment obligations to China by an amount equivalent to 5.8 percent of its GDP [gross domestic product].”

Not surprisingly, a number of BRI participant countries are experiencing a sense of “buyer’s remorse.” Why wouldn’t they? More than one-third of BRI infrastructure projects have “encountered major implementation problems—such as corruption scandals, labor violations, environmental hazards, and public protests,” according to Kuo.

“Project suspensions and cancellations are on the rise,” she wrote.

Kuo’s findings are backed up by a recent study carried out by AidData, a research lab at the College of William and Mary’s Global Research Institute. According to Bradley Parks, AidData’s executive director and a co-author of the report, the unreported debts alone “are worth approximately $385 billion.” The hidden debt problem is likely to get considerably worse, he said.

What does all of this mean for Africa? In short, nothing good.

Take Equatorial Guinea, a country heavily indebted to Beijing, for example. The CCP is currently attempting to build its first permanent military base in the West African country, according to American intelligence reports. The small nation, home to just 1.4 million people, has an abundance of offshore oil reserves—a fact not lost on the CCP. According to Maj. Gen. Andrew Rohling, the new base will allow China to establish a “naval presence on the Atlantic” and directly compete with the United States.

Even countries not signed up to the BRI can’t avoid the ominous shadow of the CCP. China has invested in 52 out of the 54 African countries and 49 of the 54 countries (more than 90 percent) have signed memoranda of understanding (MoU) with Beijing. These MoUs are the equivalent of entering into a Faustian bargain. By accepting large sums of money from Beijing, African countries have allowed the CCP to enter their backyards and exploit their resources.

China’s investments in Africa are strategic. Going forward, to do business with Beijing, one will have little option but to use e-CNY, China’s new digital currency.

In 2020, Huawei unveiled the Mate 40, a smartphone that comes with a pre-installed e-wallet that uses China’s digital currency. Soon after the phone’s unveiling, the CCP started putting the phones in the hands of millions of Africans.

As researchers at the Lowy Institute noted, it appears that China’s “secondary focus may very well be Africa—with an eye towards disrupting the global financial system.”

In recent years, the Nigerian capital of Lagos, home to the fastest growing economy in Africa, has seen an influx of Chinese investments. The two countries enjoy an apparently unbreakable bond (although Nigeria is heavily indebted to Beijing), with China now looking to establish banks in the megacity. What’s occurring in Nigeria should be seen as an attempt to control the financial narrative across the entire African continent.

Not only is the CCP reshaping the financial narrative, it’s also reshaping the military one. According to a recent report, “China’s military education and Commonwealth countries,” several African nations, including Ghana and Tanzania, have opened CCP-sponsored “politico-military schools.” These establishments should be understood in the context of Beijing’s growing efforts to gain even greater levels of control over developing countries, according to analysts Radomir Tylecote and Henri Rossano. Not surprisingly, as the report shows, a large number of the countries participating in these programs are also members of China’s BRI.

In less than a decade, China has essentially conquered a continent of 1.2 billion people, a continent with an abundance of natural resources, including diamonds, sugar, salt, gold, iron, cobalt, uranium, copper, bauxite, silver, petroleum, and cocoa beans.

As the colonization of an entire continent was occurring, the United States and the EU simply sat back and did nothing. One can’t help but feel that their latest projects, the Build Back Better and Global Gateway initiatives, are destined to fail. The CCP has an eight-year head start on Washington and Brussels, with the majority of African countries being heavily indebted to Beijing.

The sad fact is this: Even if African countries want to leave the BRI, many of them can’t.

If in doubt, let me point you in the direction of Uganda, a country with a debt standing at $18 billion, almost 50 percent of its GDP. The country owes most of this debt to China.

Ugandan President Yoweri Museveni recently sent a delegation to Beijing to renegotiate the outstanding debt. However, as Nigeria’s Punch Newspaper reported, “the request was turned down,” with the CCP refusing “to allow any alteration in the original terms of the loan agreement.” What does this mean for the East African nation? It’s likely that the Ugandan government will have to “forfeit the Entebbe International Airport”—the country’s only airport.

China’s “financial assistance” is little more than predatory lending, with collateral in case of loan default coming in many forms, including international airports. What we’re witnessing is death by a thousand cuts—an entire continent being swallowed up by the communists in Beijing. Considering that CCP leader Xi Jinping recently promised to invest another $10 billion in Africa over the next three years, expect the Chinese assault to continue.