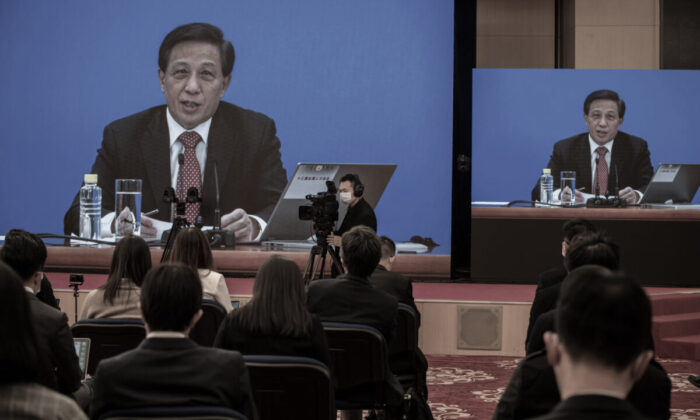 Beijing is pushing ahead with a proposal to overhaul Hong Kong’s electoral system and allow only “patriots” to govern the city, officials announced on March 4.

Zhang Yesui, a spokesperson for the National People’s Congress, said the plan will be the seventh item on the agenda when China’s rubber-stamp legislature convenes on March 5.

Events in recent years showed that Hong Kong’s electoral system needed “improvements” to “keep up with the times,” Zhang said in an implicit reference to the months-long pro-democracy protests beginning in the summer of 2019 in opposition to the regime’s growing encroachment on the self-rule and freedoms pledged to the city after the 1997 handover from the UK.

Chinese authorities have moved quickly over the past year to tighten control, imposing a national security law that punishes any activities it defines as secession, subversion, collusion with foreign forces, or terrorism.

Signals of the latest move had surfaced as early as late January, when Chinese leader Xi Jinping stressed the importance of having only “patriots rule Hong Kong” in a virtual meeting with Hong Kong’s Chief Executive Carrie Lam, during which Lam reported on her annual job performance.

A month later, senior official Xia Baolong, who heads the State Council’s Hong Kong and Macau Affairs Office, gave a speech to echo Xi’s viewpoints, claiming it to be an “inevitable” requirement for China to exercise sovereignty over the former British colony.

Xia specifically mentioned the protesters, or “rioters” as he called them, describing them as “anti-China” and wreaking havoc in Hong Kong.

“Why were the hostile forces in and outside of Hong Kong able to cause troubles in Hong Kong … and even gather momentum in some political organs and some areas?” he said in the speech. “One direct reason is that the principle of ‘patriots ruling Hong Kong’ has not been fully implemented.”

The election in Hong Kong, Xia said, must effectively bar the non-patriots from occupying key positions “in any situation.”

Neither Xia nor Zhang revealed any specifics about the electoral changes. Some of the city’s Beijing loyalists, however, have suggested replacing the 117 district councilors—largely a group of democracy advocates—with local delegates to the Chinese People’s Political Consultative Conference, a political advisory body, and barring them from selecting the city’s leader.

Priscilla Leung, a pro-Beijing lawmaker, also called for establishing a special committee to review potential candidates’ eligibility to participate in the local elections.

“There have been many occasions in the past when a person was allowed to join an election after signing a declaration form [promising to uphold the Basic Law and pledging allegiance to the SAR]. However, after being elected into the district councils, they started advocating ‘Hong Kong independence’ or ‘self-determination,’” she said. “This situation is not ideal.”

Hong Kong has made 100 arrests over national security law-related offenses, according to a police statement. On Feb. 28, the government directed subversion charges against 47 opposition figures for their participation in an unofficial primary vote last July, which the local pan-democracy camp held to field promising candidates for legislative offices.

In a sign of the city’s eroding image as an international financial hub, conservative think tank Heritage Foundation on March 3 excluded Hong Kong from its latest annual index that tracks countries’ economic freedom. The city had been a top-rated economy on the list for 25 years.

Even though the city, along with Macau, still enjoys relatively more investment freedom than mainland China, “developments in recent years have demonstrated unambiguously that those policies are ultimately controlled from Beijing,” the think tank said in a statement (pdf).