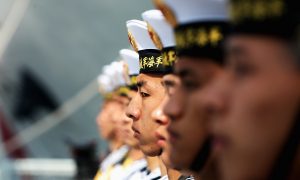 CHINA SECURITY: China's Military Base in Djibouti Is Another Step in Its Push Abroad
0
Share Now
FacebookTweetParlerEmail
Copy Link 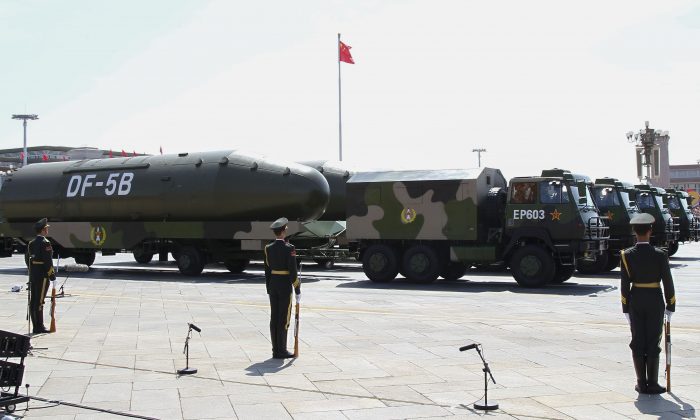 The Chinese military displays its DF-5B missiles during a military parade in Tiananmen Square in Beijing on Sept. 3, 2015. The Chinese regime may put its nuclear forces on "hair-trigger" alert. (Rolex Dela Pena/AFP/Getty Images)
China

China May Put Its Nuclear Forces on ‘Hair-Trigger Alert’

The Chinese regime may be changing its policy on nuclear weapons, from one based on “survivability” to one that has its missiles ready to launch at any moment.

Recent discussions in the Chinese military “suggest pressure is building to change China’s nuclear posture,” says a new report from the Union of Concerned Scientists.

It may be moving, the report says, “toward a policy of launch-on-warning and hair-trigger alert.”

As the report notes, the United States “keeps hundreds of nuclear weapons on hair-trigger alert.” But if China were to change its policy, it would make the threat of nuclear war more present.

“Such a change would dramatically increase the risk of a nuclear exchange or accident—a dangerous shift that the United States could help avert,” it states.

There has been a chain of incidents leading to the alleged shift.

In 2012, the leader of the Chinese Communist Party (CCP), Xi Jinping, gave a speech on nuclear policy, and its nuclear troops were told to “maintain a high alert level … assuring that if something happens we’re ready to go.”

In 2013, an updated text on Chinese military strategy, which the report says the Union of Concerned Scientists partially translated, said China’s nuclear forces would move towards a “launch-on-warning” posture.

It says that these examples, along with others, “suggest that a domestic conversation about raising the alert level of China’s nuclear forces is taking place.”

The report warns that if China adopts a hair-trigger policy for nuclear launch, it would increase the “risk of an accidental, mistaken, or unauthorized nuclear launch, as evidenced by dozens of close calls in the United States, Russia, and former Soviet Union.”

“Technical and human errors are especially likely early on, as radar and satellite warning systems are developed,” it states.