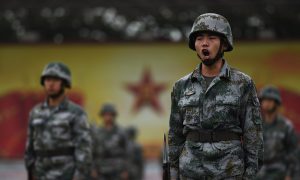 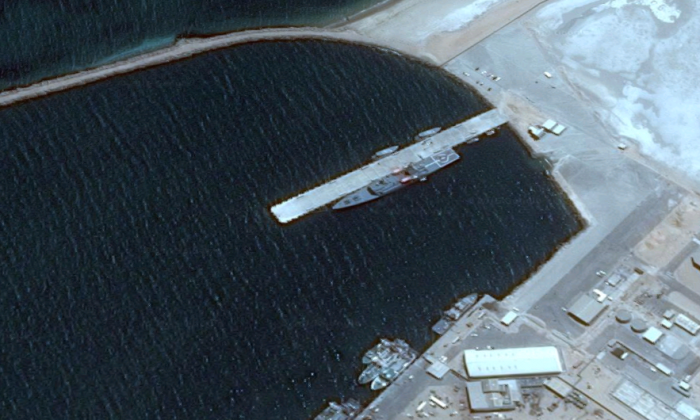 Large ships docked in Walvis Bay, Namibia, in a March 29 satellite image from Google Earth. The Chinese regime is allegedly working out a deal to build a naval base in Walvis Bay. (Google Earth)
China

China May Build a Naval Base in the South Atlantic

The Namibian, a local publication in Namibia, reports obtaining a confidential letter on China’s alleged plan to build a naval base in Namibia’s Walvis Bay. In a Jan. 20 article, it writes the letter was sent from Namibia’s ambassador to China, Ringo Abed, to Namibia’s foreign ministry.

The letter states, according to The Namibian, “[Chinese] delegation will visit Namibia … for discussions … on the way forward regarding plans for the proposed naval base in Walvis Bay.”

Local officials in Namibia seem to be sending mixed messages, according to The Namibian, saying the reports are “unfounded.” Other officials denied knowledge of the deal or did not return requests for comment.

Deal in the Making

The Namibian cites Abed discussing the deal with Yansheng, who allegedly suggested in the letter that Namibia has had problems with illegal fishing trawlers in its waters, saying that a Chinese naval presence will deter any would-be illegal trawlers and smugglers in Namibian waters.

The deal also allegedly contains an agreement that the Chinese regime’s People’s Liberation Army (PLA) navy will help train the Namibian navy for both combat and civilian operations. The arrangements were set to move forward on March 21, Namibia’s Independence Day, when its new president, Dr. Hage Geingob, was sworn in.

A four-paragraph article from Want China Times on Nov. 27, 2014, makes the Chinese regime’s interests clear, yet does not say anything about a concrete deal.

It cites the Namibian Times saying military spokeswoman for Nambibia, Lt. Col. Monica Sheya, “confirmed that China hopes to build an overseas naval base at Walvis Bay in the next 10 years,” and adds that high-level talks are being held between Namibia and China about the base.

A Chinese state newspaper, International Herald Leader, had reported in November 2014 on the base as well, according to a Jan. 20 report in The Namibian. It states the Chinese regime wants 18 overseas bases in countries including Namibia (at Walvis Bay), North Korea (at the port of  Chongjin), in Thailand (at the port of Koh Lanta), and in several other key spots.

“During my visit to Walvis Bay, China’s plan to build a naval base was the talk of the town,” states O’Brien, noting that already the Chinese regime has a “major satellite tracking installation” in Namibia, and is also developing uranium mines there.

Walvis Bay has the only deep water port in Namibia, he notes, and has a long and dwindling relationship with the U.K. Royal Navy It’s strategic importance also made it a key flashpoint in World War I and World War II.

“From a base at Walvis Bay, PLA navy warships would have short distances to sail for friendly, if not allied, ports,” he stated.

From the port, he adds, the Chinese regime would also be able to patrol key areas around Africa and South America, and “the approaches to the key North Atlantic sea lanes linking the Americas, Africa, and Europe would be nearby.”

He adds that further, “a robust PLA navy presence in the South Atlantic could cause the U.K. to seek an accommodation with China in order to protect its last important overseas territories.”