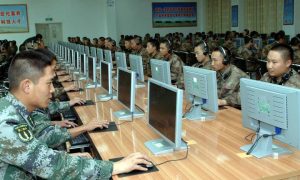 CHINA SECURITY: What Can Be Done to Stop Chinese Economic Theft?
0 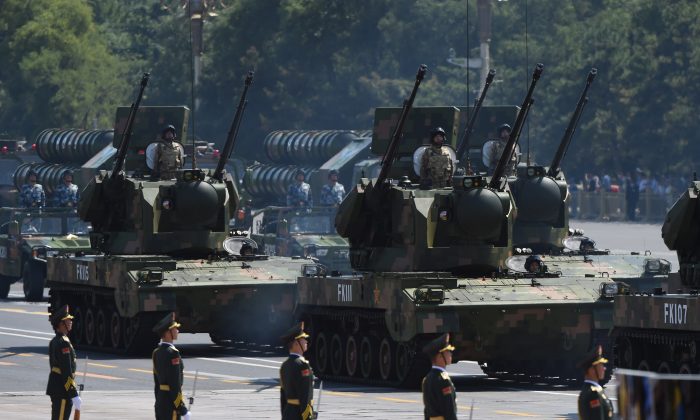 The Chinese military displays its equipment during a military parade at Tiananmen Square in Beijing on Sept. 3, 2015. Author and filmmaker Peter Navarro warns that China may be on the path to war. (Greg Baker/AFP/Getty Images)
China

For most of Europe, war seemed ridiculous at the turn of the 20th century. It was in the budding era of globalization, and Europe controlled close to two-thirds of global trade. It hadn’t seen a continentwide war for nearly 100 years, since the days of Napoleon.

Yet, one of the great jokes that history plays is that everything seems obvious in retrospect. Behind the industrialization and emergence of a global industry, the gears of politics and competition were still turning as they always had.

Despite the fact that Great Britain and Germany were among the world’s top trading partners at the time, to the surprise of many, the first world war—one of the worst wars the world has ever witnessed—erupted on July 28, 1914.

Author and filmmaker Peter Navarro fears that the world may again be heading in this direction—again in a new era of globalization, and again between two of the world’s largest trading partners.

In his new book, “Crouching Tiger,” and an accompanying documentary film series, Navarro tries to answer the question of “Will there be a war between the United States and China?”

“Yes, they are our largest trading partner,” he said, yet added that we can’t think that trade will protect us from conflict. “That was the exact philosophy that got us into World War I.”

There are many powder kegs that could ignite a serious conflict with China, which Navarro details in his book.

With its push to control disputed waters in the South and East China Seas, China has sparked conflicts with countries including Japan, Vietnam, and the Philippines. It is now threatening war against Taiwan, over the newly elected Taiwanese president who opposes Chinese influence. And China’s relations with North Korea are rapidly deteriorating.

Bonnie Glaser, director of the China Power Project at the Center for Strategic and International Studies, said in the documentary that she often calls China “the autistic power,” as it “just does not seem capable of understanding how its behavior really scares the rest of the region.”

For the United States, the problems with China are also becoming too numerous for policymakers to ignore—whether it’s the Chinese regime robbing U.S. companies with cyberattacks, its takeover of disputed waters in the South China Sea, or its use of nefarious methods to prop up its economy.

“I wouldn’t like to alarm everyone by saying we’re at war with China, but we certainly have profound differences, which they’re prepared to settle by force,” Stefan Halper, director of American Studies at the Department of Politics at the University of Cambridge, says in the documentary “Crouching Tiger.”

The world is at the crossroads of how to address these issues, and Navarro hopes that by presenting historical examples and detailing the broader picture of the Chinese regime’s militarization, he can help better educate the public on what is otherwise a complex topic.

Crouching Tiger: What China’s Militarism Means for the World from Peter Navarro on Vimeo.

In “Crouching Tiger” Navarro leads readers along an investigation—presenting them with questions to ask, then showing them facts that would allow them to draw their own conclusions.

He also took time to interview more than 30 of the top experts on Chinese military issues, and managed to condense their analysis into a digestible package.

In just 300 pages, Navarro gives a near complete picture of Chinese militarization and the deeper ambitions behind its developments. He has presented in an entertaining way, and in simple terms, information that would otherwise take several years to gather and grasp—and gives a broad picture of Chinese militarization that is otherwise understood by only a small handful of experts.

“What I’m trying to do is show the links between all these things, and how they’re all related,” he said, noting “You can’t treat those things in an isolated basis.”

You may be familiar with Navarro’s work. He’s the author of “Death by China,” and directed a film by the same name, both of which analyze unfair trade practices by China, and their effects on the United States.

Through methods including currency manipulation and ignoring free trade agreements, Navarro said the Chinese regime has shut down close to 50,000 U.S. factories and put Americans on the unemployment line. But the economic issue, he notes, can’t be viewed separately from China’s military ambitions.

“In order for this country to defend itself, and to help its allies, it needs to have a strong economy to generate the tax revenues it needs to build the military it needs, and a manufacturing base for the shipyards to actually build the systems,” he said.

“The economic warfare against the United States of America by China has led to a decreasing ability for us to do what we need to do on the military side,” he said.

He added, “At the same time we’ve been weakening, the Chinese economy has been strengthening—and they’re pouring this money into their military.”

The nature of the weapons the Chinese regime is building is also of particular concern, since as Navarro notes in his book, many of the weapons are designed specifically to fight the strengths of the U.S. military. Among these are its buildup of anti-ship ballistic missiles, and its development of anti-satellite weaponry.

Navarro holds that defense shouldn’t be looked at just in terms of military power, and noted that many strategic problems with China cascade into other fields.

“American forces are not in Asia simply to protect allies or for a moral crusade,” he said, noting the Asia Pivot strategy, which has increased U.S. presence in the region. “It’s for our economic interest.”

Yet if the United States were to pull away from Asia—as many experts believe the Chinese regime is pushing for—he said it’s likely Japan and South Korea would arm themselves with nuclear weapons, and the region would fall into instability.

“You quickly come to the conclusion we need to be there for economic and strategic reasons,” he said.

“Great nations are not strong because of just their military—it’s their economy, their education system, their ability to innovate, and the ability of their political system to provide solutions rather than gridlock,” he said.

And looming over it all, is a question that John Mearsheimer, a professor at University of Chicago, said in the documentary is “simple and profound.”

“Can China rise peacefully?” Mearsheimer asks. “My answer is ‘No.'”