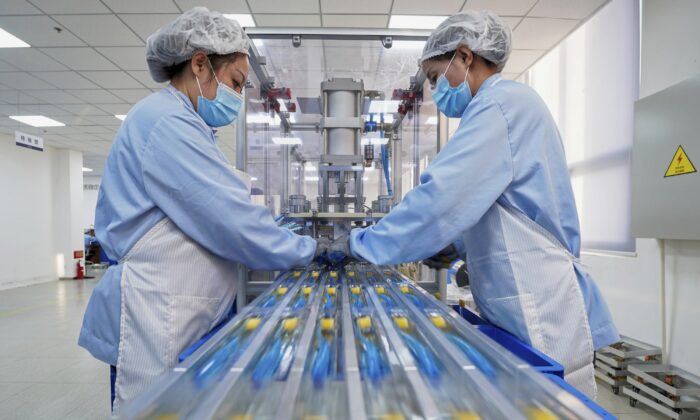 Workers wearing protective masks align the toothbrushes on the production line at a factory in Yantai, in east China's Shandong province, on Jan. 20, 2022. (Chinatopix via AP)
China Business & Economy

BEIJING—Manufacturing activity in China grew at a slower pace in January compared to the previous month, according to an official measure, as the Chinese regime’s strict “zero-tolerance” COVID-19 measures put a dampener on economic activity.

The purchasing manager’s index (PMI), tracked by China’s National Bureau of Statistics (NBS), slipped to 50.1 from 50.3 in December, continuing a third month of weak growth. A separate PMI by the business magazine Caixin showed on Sunday that manufacturing activity fell even further, contracting from 50.9 in December to 49.1 in January.

PMI is tracked on a 100-point scale in which numbers above 50 show activity expanding and below show a contraction.

New orders, which are measured in a sub-index, also fell, dropping to 49.3, according to the official measure. New export orders activity also continued to contract, although at a slightly slower pace in January.

The Chinese regime implemented strict lockdowns starting in December and continuing into the new year that barred people from leaving their homes. The lockdowns have affected up to 20 million people.

Zhao Qinghe, senior statistician at NBS, said in a statement Sunday that China faces multiple challenges, including a complicated economic environment and outbreaks of COVID-19 across the country.

Non-manufacturing PMI growth also declined, from 52.7 in December to 51.1 in January, with construction and service sectors both seeing weaker growth.