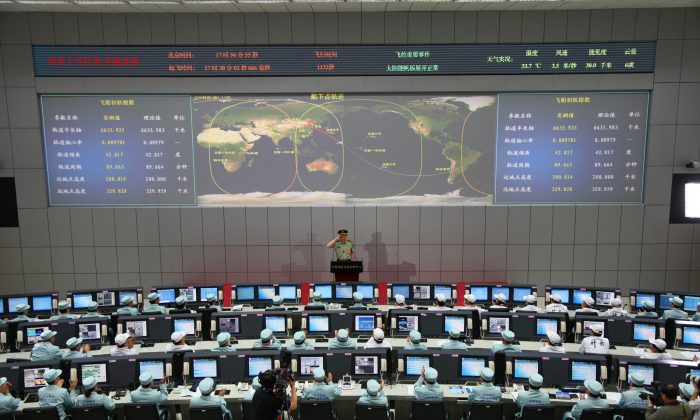 The Chinese Communist Party (CCP) allegedly brought its military replacement for the Global Positioning System (GPS) into full operation in the course of just over four months. It now plans to promote the technology first among nearby countries, then globally by 2020.

GPS, run by the U.S. government, had a nearly $56 billion economy in 2015, according to GPS World. The CCP is now attempting to tap into this market.

According to a July 30 report from Chinese news outlet DWNews, the CCP allegedly brought its Beidou Satellite Navigation System (BDS) into relative full operation over the last several months. It made a large breakthrough in its BDS technology with its Beidou No. 3 satellites. From Nov. 5, 2017, to March 30, 2018, the regime launched eight of the new satellites.

GPS is currently used in nearly every major positioning technology, from Google Maps to e-commerce to social networks. Since the technology would be crucial in wartime for fighter jets, military communications, and missile guidance systems, similar technologies have been created by Russia with its GLONASS system, the European Union with its GALILEO system, and China with its BDS system.

BDS was launched by the CCP in 1994 with three satellites. The earliest system was filled with flaws, and its coverage was mainly limited to China. It did not advance significantly until the launch of the Beidou No. 3 satellites in November 2017.

For the CCP, the technology is a dual-use system: The regime is selling it to economic sectors, but as the technology advances, it will also increase the regime’s military capabilities.

According to DWNews, the Chinese regime has already embedded BDS into “various large-scale weapon launching platforms” and in “single soldier reconnaissance and group operations.” It cites British news reports claiming that the BDS will increase the precision of CCP military weapons strikes.

The report says the CCP is currently developing capabilities in the BDS for “reconnaissance, surveillance, command, and assisted attacks,” among others.

The CCP is also being clear on its ambitions behind the BDS. In addition to its increased military capabilities, the report states that the multibillion-dollar market around the U.S.-led GPS system will drop as the CCP continues to push its system, and that it is already pushing BDS in Hong Kong, Macao, Taiwan, and Pakistan.

It adds that the CCP is also in talks with the “Asia-Pacific Space Cooperation Organization, Thailand, South Korea, Australia, Malaysia, Indonesia, and other countries,” to adopt the BDS system in place of GPS.

The report states that as it pushes BDS, U.S. influence will drop as nations no longer fear losing access to GPS if they commit acts to anger the United States. It also notes that BDS is able to tap into GPS to leverage both technologies.

As the CCP continues to push for the advancement of its space technologies and weapons systems, it may also be ramping up its programs to steal technology from other nations. The United States is warning that the Chinese regime may increase its programs to steal space-related technologies. Even Russia, which has maintained otherwise close ties with China, has begun to call out the CCP on the issue.

VOA reported in Chinese that on March 1, Russian President Vladimir Putin announced the development of a new hypersonic missile system; and that on July 20, it was revealed that the missile technology had already been leaked. This led to a series of Russian news articles claiming the CCP’s threat to Russian space technology is Russia’s greatest threat.

It cites Russian news portal Lenta.ru, which reported on July 24 that “China has stolen Russian space secrets and has nothing left to steal.”