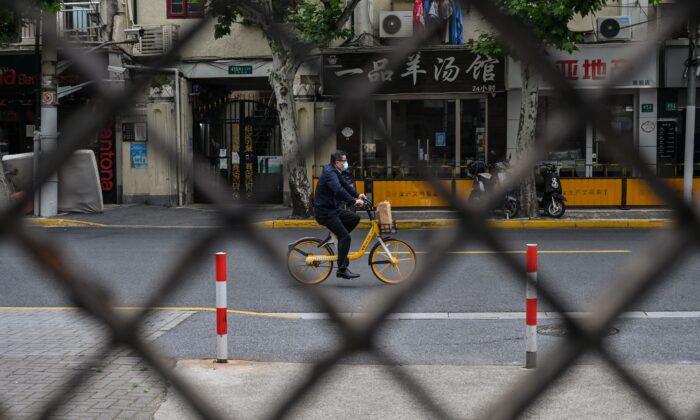 A man rides a bicycle on a street seen through a fence of a compound in lockdown during a COVID-19 lockdown in the Jing'an district in Shanghai on May 19, 2022. (Hector Retamal/AFP via Getty Images)
Thinking About China

Protests against CCP lockdowns could overthrow the regime

Protests are spreading in China because of extreme COVID-19 lockdowns, employer and bank failures, rationing of food and sanitation, and Chinese leader Xi Jinping’s attempt at an unprecedented third term as leader.

The Chinese Communist Party (CCP) claims that foreigners instigate the protests, which are censored on social media. Rebellious netizens then repost them, including to the blockchain, making them impossible to delete.

The CCP’s lockdowns, which arguably have no legal basis, are costing China as much as $46 billion per month. That’s 3.1 percent of its gross domestic product. As businesses stop operating and depositing funds in banks, the financial system is starting to falter.

In China’s Henan Province, which is located about equidistant from Beijing and Shanghai, protests by bank depositors emerged when three local banks froze as much as $1.5 billion in customer assets without explanation. Depositors are protesting at bank branches, according to a report on May 18.

In Beijing, as COVID-19 cases have spiked, lockdowns have gradually been imposed.

On May 15, a protest erupted at Beijing’s Peking University (PKU) against a new metal wall meant to lock students in their dorms. While a CCP secretary implored as many as 300 protesters to disperse, some began dismantling the wall behind him to chants of “tear it down!”

Chinese netizens praised the protest and likened it to the tearing down of the Berlin Wall.

The comparison is less far-fetched when considering that PKU played a prominent role in the 1919 and 1989 student protests in Tiananmen Square.

The most powerful spring protests emerged in Shanghai, where 25 million people have been under lockdown since March 2. The regime censored words from China’s own national anthem that were used by protesters and early videos of citizens from the city, who chanted “We want to eat” and “We want freedom.”

In April, students at two universities in Shanghai found creative ways to protest the lack of access to food, showers, and toilets. A student at Tongji University displayed a sign during a Zoom call with officials, and one student at East China Normal University used black tape to write on the door of a bathroom, “I want to shower!”

Video protests have gone viral. One such video, “Voices of April,” revealed the desperation of residents without food or freedom. Videos of the Hong Kong protest song “Do You Hear the People Sing?” were shared widely.

Another video, “Shanghai Late Spring,” showed small acts of rebellion, including citizens clashing with police, set to a British punk song with the lyrics “Cheer up London, you’re already dead.”

High-rise apartment complexes in Shanghai have coordinated “concerts” to protest lockdowns, including banging on pans and yelling from balconies.

A group of angry Shanghai residents found rotting vegetables that were supposed to have been distributed by the regime, broke into the storage area, and threw them onto the street. Dozens of residents at a time protested in the streets amid allegations of officials stealing food supplies.

Perhaps in response to the growing unrest, Shanghai officials announced plans to reopen some shopping and businesses on May 16. However, officials have increased lockdowns in some neighborhoods and canceled international soccer events scheduled for summer 2023 because of the COVID-19 pandemic.

As more than a year of future lockdowns in China looks likely, residents are fleeing Shanghai and expatriates are leaving China.

Xi will seek his third term as chairman of the CCP this year. Prominent figures in China’s regime, including former premier Zhu Rongji and senior adviser Hu Wei, have been critical of Xi and his policies, including his bid for a third term, the lockdowns, the crackdown on tech companies, and support for Russia.

COVID-19 cases and lockdowns are increasing in Beijing. The PKU protests spread from students at Nankai University near Beijing, who hung two protest banners on May 4.

Could the protests against Xi’s policies grow further? Could they ultimately overthrow the criminal regime in Beijing? We should all hasten that day.