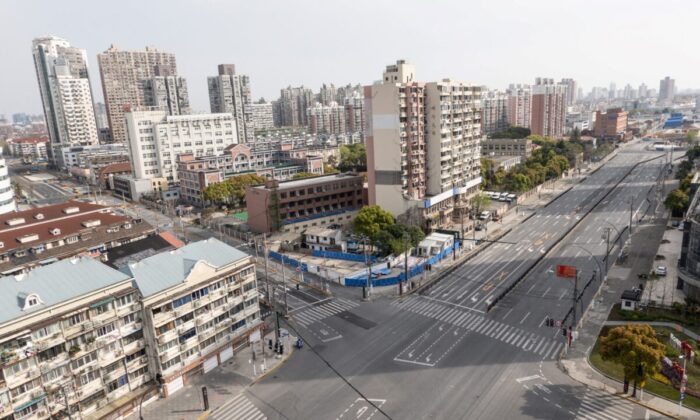 Empty streets are seen during the second stage of a COVID-19 lockdown in the Yangpu district of Shanghai, China, on April 1, 2022. (STR/AFP via Getty Images)

The CEO of Mercedes Benz, Ola Kallenius, told Bloomberg on April 29 that “new lockdowns in China, in Shanghai but also in other places in China, affects the business and also the supply chains in China but also globally.”

A senior executive from an international supplier that manufactures in China, India, and Vietnam warned in an April 29 South China Morning Post article that lockdowns in Beijing are making China less competitive for companies that have a choice and are constantly comparing business locations on metrics of stability, labor cost, and logistics.

“It is crucial that the current draconian COVID policies in China cannot be normalized,” she said. “The current strict epidemic prevention policy will make [Beijing] lose points in the future.”

According to a Nikkei Asia analysis reported on April 28, approximately half of the 200 top suppliers to Apple manufacture in the environs of Shanghai, where coronavirus lockdowns are some of the strictest in the world, including traffic restrictions and mass lockdowns when a single case is discovered. This, despite the relatively low fatality rates of, and difficulty controlling, the highly contagious Omicron variant.

The affected Apple suppliers range from iPhone and iPad assemblers “to makers of components such as displays, printed circuit boards, thermal parts, batteries, and acoustic components,” according to the Financial Times.

The problems in China sourcing this month and last will continue affecting global supply chains throughout the summer, according to multiple reports. This will decrease the supply of finished goods and increase price inflation.

The remedy, according to some, will be higher interest rates offered by the U.S. and European governments to pull money out of the private economy. That will decrease demand for goods, bringing prices down but increasing the risk of business loss, unemployment, and recession.

Raising interest rates to target inflation makes more sense when the inflation is due to government overspending and overprinting of money. It makes less sense when it’s because of supply issues. In the latter case, the remedy should be support of domestic industry, including, most importantly, where there are supply chain bottlenecks.

In addition to COVID lockdowns in China, Kallenius mentioned two other effects on Mercedes’s operations. First, the lack of microchips used in everything from toasters to cars; second, the Ukraine war, which threatens a supply shock if Russia turns off the gas.

Kallenius said, “We work very closely with the German government” on energy independence as a “top priority.”

European and North American governments could also work closely with businesses to fix the mistake of too much offshoring and foreign sourcing. They should strategically subsidize supply chains to domesticize microchip manufacturing and decouple from China’s supply lines, in addition to sourcing energy from friends rather than adversaries.

Some have called for “reshoring,” while others add the need to establish supply line sourcing to allied nations. Europe, for example, can’t source its own hydrocarbons. The answer, to use a term minted by U.S. Treasury Secretary Janet Yellen, is “friend-shoring.”

That the Treasury Department mints more than currency during an inflationary period is a good sign for business.

Subsidies and tariffs, known jointly as “industrial policy,” used to be dirty words among economists. After China’s lockdowns, the semiconductor shortage, and the energy crisis from Russian President Vladimir Putin’s war, it should be cleaned up and made ready to rumble.