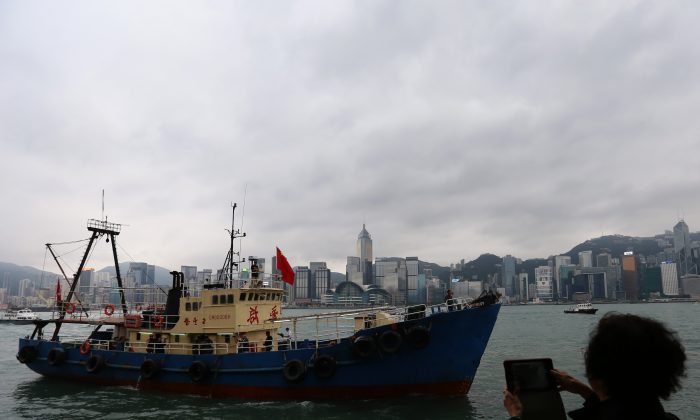 A Chinese fishing boat, which landed on one of Japan's Senkaku islands, sails into Victoria Harbor in Hong Kong on November 13, 2013. Through a new system, China is militarizing its fishing ships. (Aaron Tam/AFP/Getty Images)
China

China has a new navy. It consists of hordes of fishermen whose boats were fitted with military-grade satellite navigation systems that link with the Chinese coastguard.

The fishermen only pay about 10 percent of the cost. The Chinese regime shoulders the rest. Once the system is installed, they also get subsidies to help the regime enforce its territorial claims.

Fishermen in Hainan are being encouraged to venture out into disputed waters, and with their satellite system they’re expected to report sightings of foreign ships.

The Beidou satellite system (BDS) is similar to the GPS location systems in the United States, only with a few extra functions. China’s system comes with an alarm and short messaging system, which allows fishermen to alert authorities and nearby vessels.

By using fishermen to help enforce its claims, China has vastly increased both its naval reach and its ability to locate and deny access to ships from other countries.

The role played by Chinese ships in the dispute ties back to November 23, 2013, when the Chinese Defense Ministry claimed a no-fly zone over international waters in the East China Sea, which included Japanese territory.

Shortly after China established the no-fly zone, it announced a “no fishing” zone in the South China Sea. It then used the no fishing zone as a legal excuse to harass ships from other nations.

Some fishermen have gone even further—taking part in China’s military maneuvers to capture and control new territory in China’s growing bid to rule the South China Sea.

In May, China moved an oil rig into Vietnam’s Exclusive Economic Zone, far south of Hainan. It accompanied the oil rig with an armada of close to 80 ships.

Among the military and coast guard ships in China’s armada were its fishing vessels, which actively harassed and allegedly rammed Vietnamese ships.

Generals of the Chinese military speak openly about how they use the fishermen in China’s military strategies—particularly when snatching up new chunks of territory.

China’s Maj. Gen. Zhang Zhaozhong discussed one such strategy during a May 2013 interview on Chinese television.

Zhang said when China takes disputed territory, it first sends fishing ships to the area, then marine surveillance ships, and finally warships. He described the approach as a “cabbage strategy” that takes the area one layer at a time.

“The island is thus wrapped layer by layer like a cabbage … a cabbage strategy has taken shape,” Zhang said, adding “For many things, we have to grab the right timing to do them.”

It notes that by December 2013, more than 50,000 Chinese fishing boats had installed the BDS system.

Qi Chengye, a manager at BDStar Navigation which provides the BDS to 80 percent of China’s fishing ships, also said the Chinese regime has been pushing the system forward.

“The government pays for most of the cost of the client terminals, and gives fishermen diesel subsidies according to the distance and frequency of their vessels heading out to sea,” he said.

Reuters had similar findings on the ground. Several fisherman in Hainan told the news agency that authorities were encouraging them to sail to disputed waters. One fisherman said they get paid based on the sizes of their engines, with his 500 horsepower engine getting him $320 to $480 a day.

No fishermen interviewed by Reuters said they had used the BDS to make a distress call.