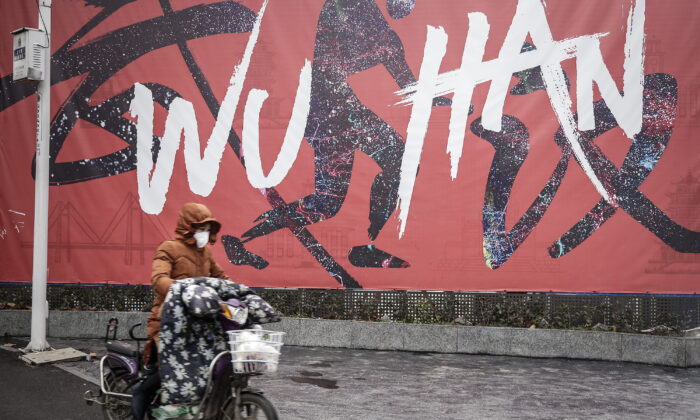 A woman wears a mask while riding an electric bicycle in Wuhan, Hubei Province, China, on Jan. 22, 2020. (Getty Images)
By Olivia Li

The outbreak of Wuhan coronavirus has made many mainland Chinese realize that the Chinese Communist Party (CCP) and its media mouthpieces do not tell the truth or tell the whole story. Social media users in Wuhan, especially doctors and nurses, share their experiences and post videos on social media to alert everyone of the true situation, which the authorities find embarrassing.

According to Xinhua News, the Chinese regime’s main newspaper, China’s most popular social media WeChat published a notice on Jan. 25 announcing new regulations and punishments for “those who spread rumors about the new form of pneumonia.”

“A variety of unsubstantiated comments posted to the internet constantly stir up public panic,” the notice read, “All those who spread fake news and thus disturb social order will face up to three years in prison, detention, or disciplinary action. Those who have caused serious consequences will be given 3-year to 7-year prison terms.”

The notice also claimed that WeChat is now working with a “rumor defying agency” to refute and delete any rumors appearing on WeChat. Accounts of those users found spreading rumors may be suspended.

A leaked document from Cyberspace Administration of China also stated that starting on Jan. 26, all social media groups are forbidden to publish any news about Wuhan pneumonia that are not from official sources. The police will arrest all those who spread unconfirmed news.

Freelance writer Jiang Lijun revealed on Twitter on Jan. 26 that his WeChat account was permanently closed because he called on top officials of Wuhan City and Hubei Province to apologize for their actions and step down, and posted several articles about Wuhan pneumonia.

Ever since medical researchers identified the new coronavirus, local authorities have been working to dispel rumors and make arrests. As a result, residents of Wuhan were uninformed about the disease and didn’t institute preventative measures until the whole city was put into lockdown.

When the new WeChat regulation was announced, Chinese netizens became outraged. One person wrote, “The officials’ information blockade is precisely the reason that caused Wuhan pneumonia to spread quickly. How shameless you are to continue silencing whistleblowers.”

A video showing three corpses, wrapped in white cloth, lying on a hospital floor was widely circulated online recently. Meanwhile, the nearby waiting area was crowded with people waiting for treatment.

The person videotaping the scene said, “These three corpses have been here for the whole morning. One person passed away in the early morning and still no one has come to remove the bodies. Now, doctors, nurses, and patients all have to endure such an environment.”

The corpses of patients with contagious diseases pose a danger to other people and require special treatment when handled by mortuary personnel. They should not be left in a public area.

China’s Youth League then refuted the video, saying, “After investigation, we found that this video does not reflect the truth.”

An outraged netizen furiously disputed the Youth League’s words: “Who is spreading rumors? It is you. A good friend of mine works in this hospital. She worked in the emergency department on Chinese New Year’s Eve until 3 a.m. Working at ground zero, she certainly knows whether the three on the floor were dead or alive. Medical personnel at the frontline are now desperate and crying for help.”

Another posted video showed a doctor in a state of mental collapse. Wearing a protective suit, he asked to speak to the president of the hospital on the phone, yelling: “I am here working overtime, four shifts a day. I cannot even pause to take a moment’s rest. What have you done [to share our workload]? Remove those [corpses] on the floor. Remove them all!”

According to Chinese state media, several social media users have been arrested for “spreading rumors.”

A woman surnamed Xi, 29, was placed under detention on Jan. 25 for “reporting fake numbers of infected Wuhan pneumonia patients on Jan. 24.”

Changsha County Police Department of Hunan Province put a man surnamed Zhou in detention because he said “four residents” in his community had been diagnosed with Wuhan pneumonia. The police insisted that the diagnosis was confirmed for only one patient. However, the community’s management team later put up a notice announcing that there were indeed four confirmed cases.

At the same time, more and more Chinese netizens are directing their anger at the Chinese Communist Party.

A young man from Wuhan posted a video on YouTube begging for international help.

“Today is the Chinese New Year, but Wuhan is like hell,” he said. “I call on all conscientious people to help us.”

He also urged the international community to differentiate Chinese people from the “rotten Chinese government.”

“Trust me, many Chinese my age, who were born in the 80s and 90s, are not silly supporters of the Chinese regime. We are not brainwashed,” he said.