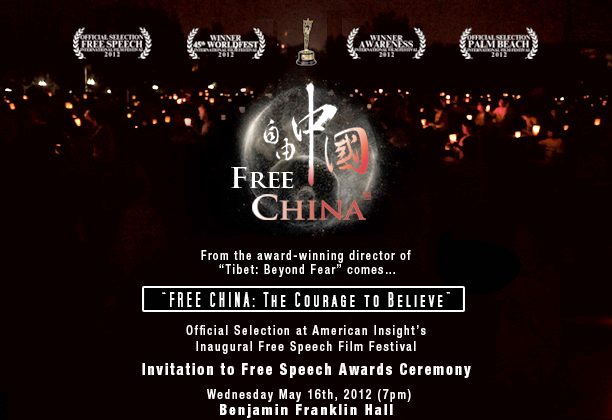 "Free China: The Courage to Believe" will be screened at the Free Speech Awards Ceremony on Wednesday, May 16. (Courtesy of NTD Television)
Entertainment

A documentary capturing widespread human rights abuses in China, has won the top award in its category at West Hollywood’s Awareness Film Festival over the weekend, just a month after receiving another top award at the 45th World-Fest Houston Film Festival.

The feature length documentary, Free China: The Courage to Believe, follows the remarkable stories of Jennifer Zeng, a mother and former Communist Party member, and Dr. Charles Lee, a Chinese-American businessman. Both were arrested, tortured and subjected to slave labor for their spiritual belief in Falun Gong, a traditional Chinese meditation and exercise practice which is persecuted in China.

Directed by award-winning film maker and activist, Michael Perlman, and produced by Kean Wong of New York-based independent New Tang Dynasty Television, the documentary film provides fresh insight into China, a country that has unmatched growth in GDP but also a political fragility and deviation from international norms.

“The film is incredibly powerful, incredibly well done, really speaks to such a cause” Skye Kelly, director of Awareness Film Festival said in a press release. “I was unaware of the conditions that were still there. I think a lot of people are as well and kind of opened my eyes to a situation and something that I want to be proactive about. So it was very powerful.”

Free China not only captures the hundreds of thousands protests that occur each year inside Mainland China, but also an under-reported yet ongoing movement called Tuidang or Quit the CCP. The trend involves tens of millions of Chinese citizens quitting the Chinese Communist Party and its related organizations, using the website of the Chinese edition of The Epoch Times newspaper.

The film also addresses the systematic and state sanctioned practice of organ harvesting of imprisoned Falun Gong practitioners for profit.

A highlight of the film is the insight it gives to the way in which large corporations contribute to China’s violations. Free China documents specific U.S. companies and illustrates how, through business with China, they enable the Chinese leadership to suppress dissidents. It also details the recent lawsuit filed by the Human Rights Law Foundation against Cisco System for allegedly implementing an elaborate surveillance apparatus that has led to the detention and torture of many Chinese prisoners of conscience.

Capturing the intricacies of the challenges China poses for the international community, the film sheds light on how the advancement of Internet technologies have helped human rights activists throughout China and around the world to challenge censorship of information in closed off societies.

On another positive note, the film also identifies a resurgence of traditional Chinese culture and spirituality which is contributing to a new China with traditional virtues.

Free China will be one of the six official selection films highlighted at American Insight’s inaugural Free Speech Awards Ceremony on May 16 at the Benjamin Franklin Hall in Philadelphia. Tickets are available at http://www.freespeechfilmfestival.org.