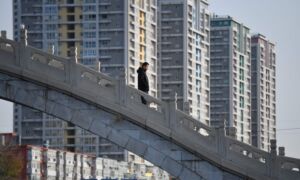 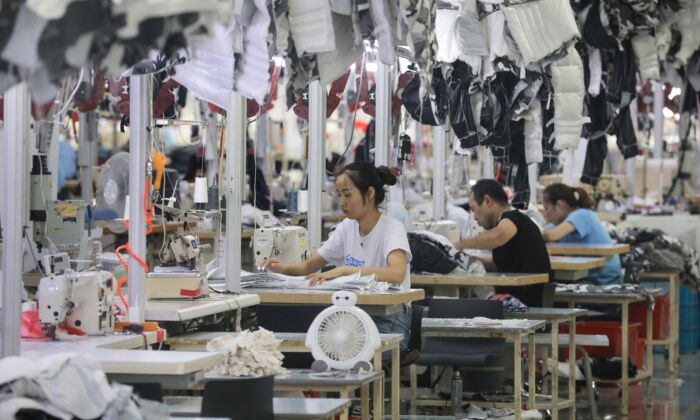 Workers are sewing down coats at a factory for Chinese clothing company Bosideng in Nantong of Jiangsu Province, China, on Sept. 24, 2019. (STR/AFP/Getty Images)
Thinking About China

China Has a Problem With New Working Hands and Minds

The Middle Kingdom’s population is aging. It has fewer young people to replace the retiring older generation, the one that manned the machinery of China’s huge advances since Deng Xiaoping abandoned Mao Zedong’s economic model. This demographic challenge presents China’s economy with a huge challenge. The problem is one of Beijing’s own making. It was after all Deng who promulgated the one-child policy that has so limited the supply of young workers. At this point, however, it matters less what caused the problem than that one exists. A shortage of young workers will tend to slow the pace of economic growth and development, and steal much of the dynamism that has thus far characterized Chinese economics.

While Beijing is no doubt aware of this matter, it is strangely absent in many otherwise insightful and detailed western commentaries on and analyses of developing Sino-American relations. It is not that the facts are hidden, but these analyses, perhaps because most of these writers have primarily diplomatic, military, and political instead of economic backgrounds, too often proceed on the assumption that China’s economy will somehow remain unaffected, retain much of its former dynamism, and continue to confront the world with an all-but-unstoppable economic juggernaut.

Perhaps, if China succeeds in its Belt and Road Initiative these assumptions will remain realistic. Likelihoods, however, demand that these analyses, wherever they begin, need to take account of this huge change coming in China, how it will limit that otherwise remarkable economy, and by implication how it will affect Beijing’s capabilities in the years to come, whether economic, political, or diplomatic, as well as military.

Today’s developing demographic pressures are radically different from those China enjoyed during the period of its remarkable development. Back in 1979, when Deng abandoned Mao’s failed economic model (and incidentally promulgated the one-child policy) China had an abundance of labor resources.

The part of the population available for work—conventionally designated as those between the ages of 15 and 64—amounted to some 90 percent of the adult population. With nine ready for work for every dependent retiree, China had an easy time meeting the demands of industrialization and development. Compare this to the situation in the United States at the time, which had barely five people of working age for every dependent retiree. But the one-child policy undermined this strength. It brought China’s birth rate below replacement to a mere 1.6 children on average in each woman’s lifetime, according to United Nations demographers. By the mid-1990s, the flow of young people into the workforce began to slow and in this century has fallen short of the numbers retiring. China’s workforce is actually shrinking, both absolutely and relative to the numbers of dependent retirees.

Though Beijing has recently relaxed the one-child policy, it will take 15 to 20 years before any new births can have an impact on the workforce, and besides preliminary data indicates that the fertility rate has failed to rise. Accordingly, U.N. demographers estimate that by 2040, absolute numbers in the country’s working population will have declined 10 percent from today’s level, while its population of dependent retirees will have increased some 50 percent. The economy will have barely three workers for each dependent retiree. That is little different from Japan. Those three workers will have to produce enough for their own needs, those of their other dependents, and one-third of a retiree’s support. China will have little productive surplus for future investments much less the grand projects that have drawn so much attention in the past. The economy will have lost much of its dynamism and flexibility.

Unlike aging western economies, China cannot count on immigration to mitigate this impact. Few are clamoring to get into China, and even if people were, the country’s existing population is so large that the flow would have to surpass all precedents to make a difference. In any case, it is not happening.

Of course, labor power is not the whole story. Technological advances, especially artificial intelligence (AI), and the productivity increases it will bring will allow a more efficient use of China’s available human resources. No doubt China will make strides in these areas, but the aging demographics will also limit the economy’s abilities to innovate.

Demographers, using patent data and statistics on Nobel Prize winners, have determined that people in the 30 to 40 age cohort provide the bulk of society’s inventiveness. Cross country studies show that this fact holds in all cultures and economic systems. This age cohort in China is set to shrink over the next 20 years from 43 percent of the workforce to 37 percent. This relative loss may do less damage to China’s centrally planned economy than it would to a more open Western economy that depends on competition for innovation, but it is nonetheless hardly a positive for China’s economy going forward.

On the financial side of the equation, the need to care for the elderly will impose additional restraints on China’s economic outlook. With fully 25 percent of the adult population over 64 years of age in 2040, China will qualify as what demographers quaintly call a “super-aged” population, more extreme than even Japan presently. Since at last count, less than 65 percent of Chinese workers have any kind of pension plan, much of the burden of supporting this huge population of retirees will fall on Beijing’s shoulders or on those of the provincial and local governments, which in China amounts to the same thing. These huge financial demands will absorb tremendous amounts of government resources. The International Monetary Fund (IMF) estimates that already Beijing’s unfunded pension obligations amount to 100 percent of the country’s gross domestic product (GDP). Unless Beijing’s decision makers act quickly, which they seem to have no inclination to do, that burden will only grow.

Against this backdrop, Beijing may well see the Belt and Road Initiative as a way to mitigate the demographic effects. If before the demographic pressures become intense, this initiative allows China to amass the ownership and control of foreign facilities, the country will have acquired a partial substitute for what it will lose in its domestic economic capabilities. Presently, China mostly uses its own labor to construct and run projects in the Belt and Road, but in time it could, much as the British Empire did, use native labor, reserving for its own citizens management roles. Perhaps, as also happened with the British Empire, the arrangement would garner for China a loyalty among a group of natives that supersedes that group’s loyalty to the local or national authority.

None of this says that China will disappear as a major power or that its economy will cease growing. It does say, however, that contrary to many of today’s media discussions and analyses of Sino-American relations, China’s economic growth rate will slow appreciably going forward, as will its pace of development and innovation.

Beijing will be less able than in the past to wow observers with grand investment schemes. Circumstances will also impose on Beijing’s military and space ambitions, though these are inexpensive in both financial and economic terms compared with either broad-based development or future pension demands. China will begin to resemble Japan in crucial ways, except that Japan got rich before it aged, whereas China, still not rich, will age first.