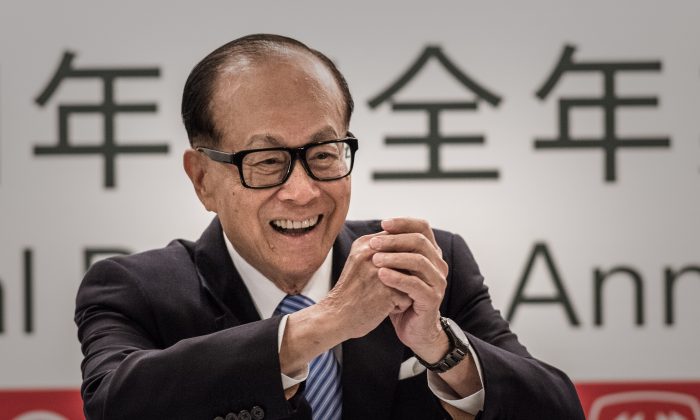 Asia’s richest man Li Ka-shing is moving his wealth from China, a sure bellwether that he sees little prospect for making more money there. After state mouthpiece Xinhua publicly denounced Li’s actions, other state-run media have added their own views. In a typically passive-aggressive manner, the reports say that China isn’t upset, not at all, not in the least, by Li’s departure.

Affectionately named “Superman” in Hong Kong for his keen business acumen, Li, 87, has been steadily shifting his assets in China to Europe since 2011. Most recently, Li, a Chaozhou-born business tycoon and philanthropist, merged his electricity company with his infrastructure company, and delisted it from the Hong Kong Stock Exchange.

This moved prompted a harsh rebuke from the Chinese regime. On Sept. 12, the Liaowang Institute affiliated with Xinhua News Agency published an article titled “Don’t Let Li Ka-shing Get Away With It.” The article criticizing him also threatened damage to his political standing in China should he continue to “just walk away.”

The tone of the Sept. 15 Securities Times piece was more huffy than the angry Xinhua article. Author Huang Xiaopeng accused Li Ka-shing of parking his money in Europe, where there is “more legal protections” so that his wealth could be “easier claimed by his descendants” instead of benefiting Chinese society.

Huang acknowledges that the regime didn’t have too much choice in the affair. “If the government made up a reason and didn’t let people leave, wouldn’t other real estate companies be afraid?”

Besides, China, which is “undergoing industrial upgrade and needs more capital,” is on the up economically compared to “old and sickly” Europe, where there is little opportunity of “reaping huge profits,” Huang writes.

A day after, a commentary in the state-controlled Beijing News echoed Huang’s point that allowing Li’s companies to stay in China would affect business confidence, and declared that “Li Ka-shing’s leaving or staying actually is no indication of China’s economy.” The commentary also tried to paint Li’s move as a purely business decision, with no links to politics.

Chinese netizens weren’t impressed with the arguments in the state news outlets.

“With this sort of statements, I feel that [Li Ka-shing] was right!” one comment on Sina Weibo, China’s Twitter equivalent.