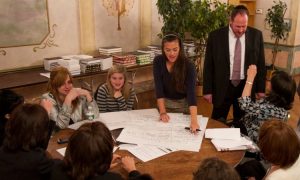 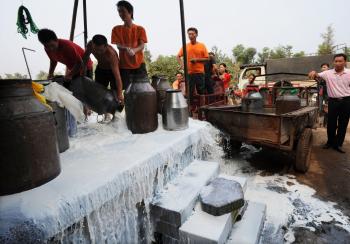 Mr. Zhou has since pleaded with Western governments to pay closer attention to the problem, but he says no one has taken him seriously so far. Now, the industrial chemical melamine has been found in China-sourced foodstuffs around the world. At least four children have lost their lives.

From an October 17 statement issued by Japanese company Mitsui & Co., Ltd. we learned that a Chinese manufactured a dry egg product containing 2.8 to 4.6 mg/kg of melamine; and the following day, the Taiwan Health Department found a high percentage of melamine in a baking powder and acid regulating compound used in the manufacturing of breads, crackers and cakes. Following the announcement, sales of baked goods in Taiwan fell sharply.

According to food experts, melamine has already entered the American food chain—from breakfast cereals, to crackers, cookies, bouillon cubes/granules to flavor enhancers for cheeses and steak and other foodstuffs. Traces of melamine can be found virtually everywhere.

Unscrupulous manufacturers in China add melamine to their products to boost the protein content.

No Modern Food Industry Without Additives

According to the weekly Oriental Outlook magazine, 97 percent of all foodstuffs contain additives – at least 25,000 products. The Japanese expert for food additives, Anbus, has calculated that each human being consumes about 10 grams of additives per day, amounting to approximately 3,650g per year – the same quantity of salt a person consumes per annum.

Eating a sandwich amounts to ingesting more than 20 additives – emulsifiers, yeasts, flavor enhancers, phosphates and aroma substances. Anbus further points out that it is yet unknown what far-reaching consequences these additives have on the body, even though they are officially sanctioned and supposedly controlled.

According to a Chinese food additive expert, most manufacturers involved in the dairy industry have added aroma enhancers to milk without informing the consumers.

This is particularly true in the baby formula industry because the companies' profits are largely dependent on the flavor children prefer and become brand loyal to.

With rare exceptions, Western meat industry manufacturers manage to produce 130g of a specific sausage from 100g of pure pork meat. The 30g difference comes from the addition of soy protein concentrate additives, egg whites and milk protein derivatives. The percentage of additives is even higher in China. For instance, dumpling fillings are 50 percent meat and the remainder is soy protein concentrate and aroma enhancers. It is common knowledge that food safety – or the lack of it – lies with food additives that can no longer be dismissed from our present lifestyle.

During an interview with The Epoch Times, Mr. Zhou repeatedly stated that these unsafe and potentially harmful additives would create a worldwide problem, but because it is not apparent yet, no government is taking it seriously. According to Mr. Zhou, 80 percent of all food additives are manufactured in China because the process results in huge ecological damage and returns a low profit margin. It often happens that Western importers put Western labels on these China-made products.