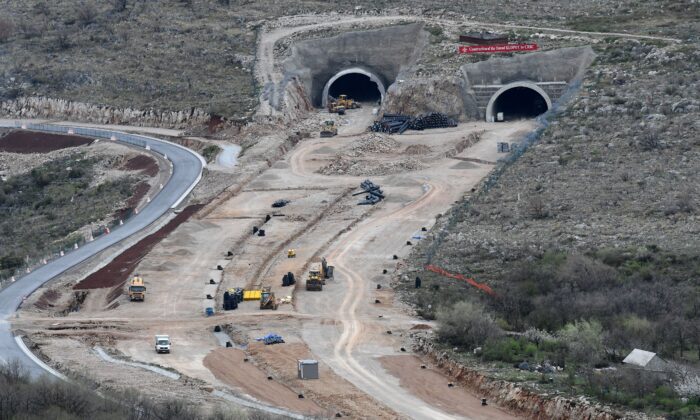 The construction of the section of a highway connecting the city of Bar on Montenegros Adriatic coast to landlocked neighbor Serbia, (Bar-Boljare highway) near the village of Bioce, north of Montenegrin capital Podgorica, which is being constructed by a state-owned Chinese company, on April 8, 2019. (Savo Prelevic/AFP via Getty Images)
Thinking About China 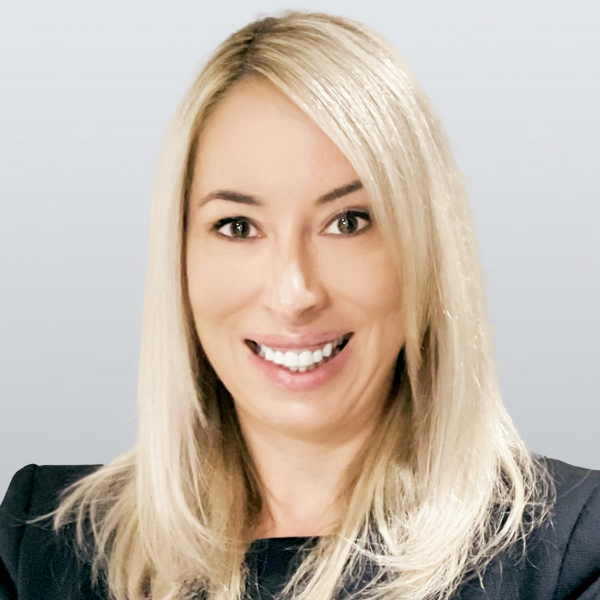 As the West faces a possible confrontation with Russia over Ukraine, it’s becoming increasingly clear that the United States can’t afford an open conflict with Vladimir Putin—and it’s not because the Russian autocrat is too strong, or the United States too disinterested.

America must keep its eyes on the real challenge, an ascendant China, and a new Cold War that Washington appears to be losing. That shouldn’t be.

The United States won the Cold War before by boosting its defensive capabilities and leveraging its economic prowess in foreign policy by investing in cutting-edge technologies and shoring up the economies of its allies. Over the past two decades, America seems to have forgotten its own winning strategy, while China clearly learned its lessons.

The gradual and seemingly voluntary renunciation of the United States’ global primacy is lately fashionably interpreted as the decline of a hegemon. Another way to see it, however, is the United States neglecting its allies, leaving them with neither financial nor security support—and giving them no choice but to side, however reluctantly, with whoever offers it. Famous for its political long game, China readily steps into the void that America leaves behind.

And so, as the late Charles Krauthammer put it, the decline of the U.S. superpower status is actually a choice, as is America’s economic engagement with China. China watches its adversary up-close: it trains its elites at U.S. universities and underwrites its economy with U.S. intellectual property. As the United States gradually abdicates its historic role as a superpower, China, the emerging new hegemon, is eager to take America’s place and fill the power vacuum.

Beijing has grown increasingly assertive in global politics, from the Middle East to Eastern Europe and Latin America. Traditionally pro-U.S. nations aren’t struggling anymore to choose between Beijing and Washington—the United States essentially has forced their hand. They have found a new patron in China that’s using its growing economic strength as the United States used to against the Soviet Union during the Cold War.

Beijing lures its funding-starved client states with investments, starting with historic U.S. adversaries and moving to countries in need of financial support, using bilateral agreements to forge alliances of mutual dependence. As Brazil’s ambassador to China Paulo Estivallet explained, “We’d rather not be so dependent on exports to China, but what is the alternative?”

As in Latin America, the United States has been active in the Middle East and the Gulf Cooperation Council (GCC) much longer than China. And yet, as America is pulling back, China is stepping in. Beijing has had its eyes on the oil-rich Persian Gulf for a while, eager to cement its cooperation—and influence—with Saudi Arabia, the United Arab Emirates, and other regional U.S. allies. Some GCC states’ relationships with Beijing have become reciprocal, at least in the short term.

Saudi energy giant Aramco signed a $10 billion deal in 2019 to expand its business beyond the kingdom, into China, starting with the city of Panjin. Not surprisingly, in January, GCC Secretary-General Nayef Falah al-Hajraf and GCC’s ministers reaffirmed their support for China’s positions on Taiwan, human rights issues in Xinjiang, and hosting the Beijing Winter Olympics. For its part, China expresses no interest in the rights of religious minorities or Saudi girls and women. It’s all strictly business.

Hungary, a European Union member state and NATO ally, has lately been vilified for cozying up to China and labeled a Chinese puppet and a Trojan horse simply because of its interest in Chinese infrastructure investment in Central Europe. Absent from the scathing criticism is any awareness that the United States failed to offer its allies any alternatives to Chinese money. Moreover, the U.S. government continues to treat Hungary as an outcast instead of an ally, blocking the U.S. ambassador nomination for 3 1/2 years and making Hungary the only democratic EU country not invited to the “Summit of Democracy” in December 2021.

China doesn’t have such problems with its strategic partners—or targets. It approaches U.S. friends and foes alike to advance its foreign policy objectives. And so, the recent $117.5 billion 30-year China–Russia gas agreement resembles the 25-year China–Iran strategic accord of 2021, though there’s a symbolic element in the deals that taunts the United States.

“Russia and China are superior to political and military alliances of the Cold War era. Friendship between the two States has no limits, there are no ‘forbidden’ areas of cooperation,” the signers announced on the opening day of the 2022 Beijing Winter Olympics.

Mahmoud Abbaszadeh-Meshkini, a spokesman for the Iranian Parliament’s National Security and Foreign Policy Committee, added the proverbial cherry on top.

“In the new world order, a triangle consisting of three powers—Iran, Russia, and China—has formed.”

America needs to remember that countries are by and large motivated by their national interest, not by ideology, and that a declining hegemon that makes cultural and ideological demands with less and less to offer in return has limited appeal. Meanwhile, China offers supposedly lucrative deals without requiring any political or ideological adjustments from the countries seeking its investment or protection—not until it’s strong enough to demand everything, that is. For now, however, it’s all business, and seemingly reciprocal at that.

The United States should relearn its own Cold War playbook and use it against the Chinese Communist Party instead of letting China wield it against the West. America must act fast to provide credible, practical, unified alternatives to China’s sprawling economic footprint, and to collaborate with its democratic allies while respecting their cultural and national identity.

The template to win this new Cold War already exists. It only needs to be revived, adapted to the new adversary, and executed. The U.S. allies will welcome America’s return.