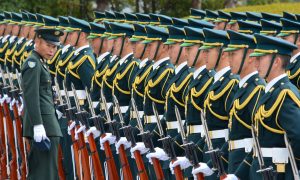 The Chinese regime used to keep a low profile around its military, and thus largely avoided international scrutiny, with its former policy for a “peaceful rise.” It scrapped that policy in recent years, however, and is now facing the political fallout from its growing aggression.

World leaders at the G-7 summit in Germany did not name China directly, yet criticized its land-grab in the South China Sea where it has been building new islands.

“We strongly oppose the use of intimidation, coercion or force, as well as any unilateral actions that seek to change the status quo, such as large-scale land reclamation,” the G-7 leaders said, according to South China Morning Post.

“We underline the importance of peaceful dispute settlement as well as free and unimpeded lawful use of the world’s oceans,” they said.

The Chinese regime declared an air defense zone over the East China Sea, which included territory under Japanese control. It soon followed this policy with a military push to enforce its claims to the East China Sea and South China Sea.

While it was able to seize territory—particularly in the South China Sea where it is simply building its own territory—other nations have grown more vocal against Chinese aggression.

Japan changed its military policy and could soon become a global military power, Australia is considering sending warships to counter the Chinese regime’s territorial claims, and other nations in the Asia-Pacific region are deepening their alliances with the United States.