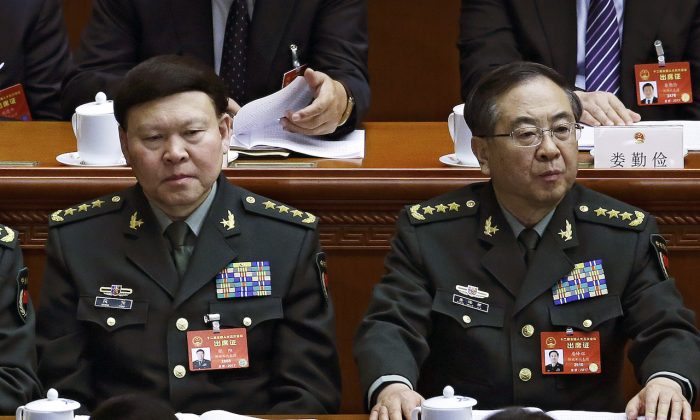 BEIJING— China’s ruling Communist Party has expelled a former top general who killed himself during a corruption probe and indicted another on graft charges amid Chinese leader Xi Jinping’s continuing crackdown on military malfeasance.

Official media reported that Zhang Yang killed himself at home last November, after which they denounced his death as a “despicable” act to escape punishment.

The Oct. 16 announcement renewed those accusations and said Zhang had been kicked out of the party and posthumously stripped of his rank. It said assets related to his crimes would be seized.

The other general in trouble, Fang Fenghui, was also expelled and stripped of his rank, state media reported. He now faces a court martial on corruption allegations.

Fang, formerly chief of the PLA’s joint staff department, dropped out of public view last year, shortly after an August 2017 meeting with the chairman of the U.S. Joint Chiefs of Staff, Marine Corps Gen. Joseph Dunford.

In their reports, the official Xinhua News Agency and other state media said Fang “seriously violated the party’s political discipline and political rules,” along with additional stipulations for members of the military laid down by Xi, who heads the joint commissions overseeing the armed forces. Xinhua said he is suspected of both offering and taking bribes and of having a “huge amount” of assets for which he could not account.

“The influence is vile,” Xinhua said. “He is politically degenerated and economically greedy.”

The judgment against Zhang even after his death underscores the relentlessness of Xi’s broad-ranging and politically charged crackdown on corruption that has felled scores of mid-to-high-ranking officials since he came to power in late 2012. More than a million officials have been investigated and hundreds of thousands disciplined.

Among others recently ensnared is the former president of Interpol, Meng Hongwei, who vanished after traveling to China late last month from France, where the global anti-crime body is headquartered. Days later, China said Meng was under investigation for graft and possibly other crimes, although there are heavy suspicions he had fallen out of political favor with Xi.

No further details were given about the charges against Zhang, although earlier reports said investigators closed in on him using testimony given by two other former top generals, Xu Caihou and Guo Boxiong, who had earlier become high-profile targets of Xi’s campaign.

Xu and Guo had also been members of the Central Military Commission. Xu died of cancer in 2015 before facing a court martial, while Guo was sentenced to life in prison in 2016.

Fang was a subordinate of Guo, once China’s highest-ranked military official, who gained power through loyalty to former Party leader Jiang Zemin. Guo enabled Jiang to control the military from behind the curtains, long after Jiang formally stepped down from the Party leadership position. Xi Jinping had been cleaning house within the military to purge any remaining influences of Jiang and his faction.

Xi has also undertaken a thoroughgoing reform of the PLA, reorganizing its structure and shrinking the size of the Central Military Commissions from nine to seven members.

Corruption has long been considered rife within the PLA, with some top generals reported to have accumulated vast fortunes in cash and gifts, including golden statues of Mao Zedong and cases of expensive liquor stacked to the ceiling in underground caches.

Along with the selling of ranks and positions, practices such as embezzlement of housing and welfare funds are believed to have severely damaged the force’s morale, discipline and combat preparedness, something Xi, a former military officer, has been eager to change.

By Christopher Bodeen. The Epoch Times has contributed to this report.