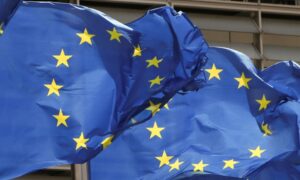 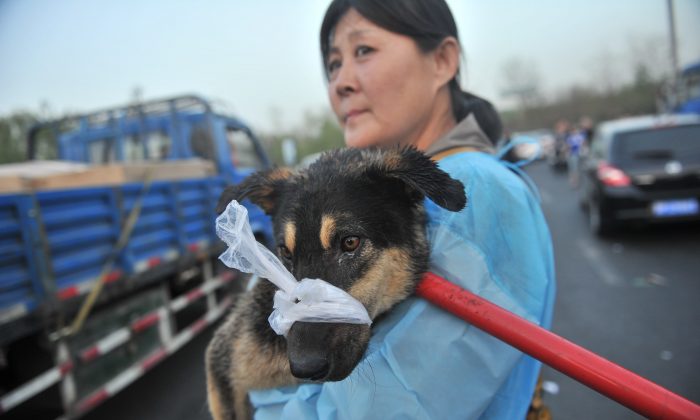 In this file photo a Chinese animal lover rescues a sick dog after a convoy of trucks carrying some 500 dogs to be sold as meat, were stopped along a highway in Beijing. (STR/AFP/Getty Images)
China

Authorities in eastern China said they broke up an operation that involved poisoning dogs for their meat, arresting seven people while recovering 11 tons of canine meat.

Most of the dog meat was sent to restaurants. Zhejiang Province officials believe the ring–headed by a man with the surname Shi–was in operation for several years, reported the Shanghai Daily.

The crackdown started after a number of dogs were stolen in the city of Haining. In July, authorities found two dead dogs, food wax balls, and other items that were dumped by an alleged thief after he escaped police capture

The case led police investigators to the dog-poisoning operation.

The perpetrators likely used the poison sodium cyanide to kill street dogs and pet dogs, said police. Suspects placed poison in wax balls, which were then placed in chicken and duck that they would use to lure the animals to their deaths.

Members of the ring would then take the poisoned dogs to the home of another suspect. Inside, there was a butcher shop used to kill the dogs and produce meat from them.

And according to recent reports, the dog meat trade in China is still thriving.

“We can’t stop them from eating dogs, as we don’t have an animal welfare law. We just hope the government could stop dog mongers from doing dog business,” one activist was quoted by the Daily Mail as saying.

In June, the city of Yulin in southern Guangxi Province held a controversial dog-meat festival amid criticism from animal rights groups. During the event, dog meat is served in a hotpot with lychees and grain liquor.

Animal rights groups have said that 10,000 dogs are killed to provide meat for the festival, saying that many are electrocuted, burned, and skinned alive. Photos uploaded on Chinese social media sites show gruesome scenes, including dogs hanging from meat hooks and piles of corpses on the side of the road, reported The Guardian.