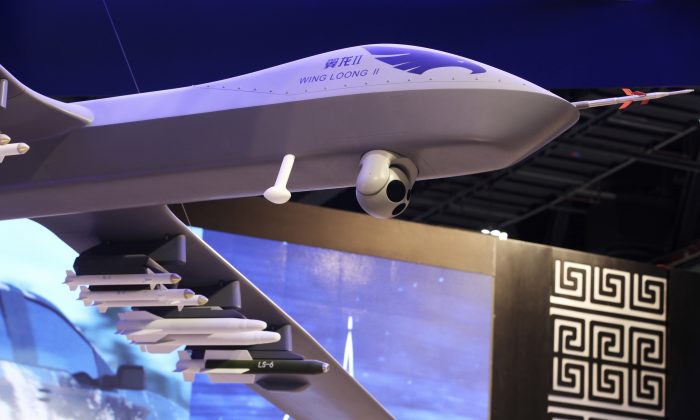 China’s drones are militarizing the world. From Ukraine to Burma, they make the battlefield more deadly for democracy. That must be the point.

Beijing ignores calls for limitations on military equipment, even when the Chinese Communist Party (CCP) knows that its drones are used for war crimes against unarmed civilians.

Neither are the most powerful democracies stepping up to the plate and imposing the no-fly zones over conflict areas that alone could protect democracy advocates and civilian populations from what are essentially lethal aerial robots. This must change, as evidenced by the destruction in Ukraine.

China’s DJI drone maker is attracting criticism for supplying the Russian military with drones used to assist in attacks on Ukrainian civilian targets. Ukraine’s vice prime minister, Mykhailo Fedorov, demanded on Twitter that DJI block Russia’s use of its drones.

“In 21 days of the war, russian troops has already killed 100 Ukrainian children,” he wrote in understandably distressed English. They “are using DJI products in order to navigate their missile. @DJIGlobal are you sure you want to be a partner in these murders? Block your products that are helping russia to kill the Ukrainians!”

In an attached March 12 letter, Fedorov said that the Ukrainian government has evidence that the Russian military is “using DJI products in Ukraine in order to navigate their missile[s] to kill civilians.”

He added, “We call on your company to stop doing business in the Russian Federation until the Russian aggression in Ukraine is fully stopped and fair order is restored.”

While companies in the West have generally withdrawn products from Russia, especially those with military applications, China’s DJI publicly rebuffed Ukraine’s pleas in what should be seen as a national insult to the Ukrainian people.

The CCP’s insults do not stop in Europe.

In Burma (commonly known as Myanmar), the junta uses China’s military drones against unarmed protesters and a growing armed resistance trying to return the country to democracy after a 2021 coup killed over 700.

“Some witnesses have both seen and photographed Myanmar Army drones in action,” according to an article in The Diplomat on Feb. 26. “They say that Chinese-made drones have been deployed several times both to monitor the protesters and crack down on the armed resistance groups.”

The drones are not just civilian drones used by the military but specially-designed drones capable of launching highly-accurate missiles.

“While some of the Myanmar Army’s drones, such as the CH-3A, can launch laser-guided air-to-ground missiles, they are primarily used as intelligence, surveillance, and reconnaissance assets,” according to The Diplomat author, Robert Bociaga.

Saudi Arabia, which is increasingly spurning a historic alliance with the United States in favor of a no-questions-asked friendship with China, has purchased weapons from the totalitarian country for years, including armed Wing Loong II drones that in 2017 were China’s biggest-ever arms export.

Now the Saudis are buying an entire drone factory as a joint venture in which the Chinese themselves are being invited into the Kingdom.

Given that the CCP is designing weapons in Saudi Arabia, any export controls that apply to China should now be considered for Saudi Arabia as well. The world’s democracies cannot allow dictatorships to build drone armies together.

The CCP’s bad faith toward democracy and civilian populations is clarified by the fact that it could order DJI and other Chinese drone makers to turn off their drones in war zones like Ukraine and Yemen, where the Saudis are battling, ironically enough, Houthis backed by Iran, China’s ally.

The Ukrainian official, Fedorov, noted in his letter that drones were turned off during Russia’s invasion of Georgia in 2008. The CCP could order this to happen again today, but it would rather watch its drones enable more massacres of Ukrainian civilians.

Autonomous vehicle technology and artificial intelligence, including aerial drones and ground-based unmanned combat systems, are the future of war. Drones are faster, cheaper, and more lethal. They never have moral qualms when ordered by a totalitarian power to destroy a city, killing all the civilians they can find.

China’s powerful industrial ecosystem and interconnected supply lines are well-placed to pump out military drones at an increasing pace over the coming years. The CCP hopes to use drones for its malign military purposes, for example, an invasion of Taiwan, and export them for the like purposes of others. So Beijing has every incentive to keep its drones in Ukraine flying, to demonstrate their efficacy for yet more exports and profit, despite the death they rain down upon hospitals, schools, and apartment buildings.

The United States could put secondary sanctions on China’s drone makers, which would likely be effective at stopping their use or sale to the Russians. One person close to DJI told the Financial Times, “The company doesn’t want to be involved in politics,” but if the United States sanctioned DJI, limiting access to U.S. components, the company would be forced to “exit the Russian market.”

What a great idea. And if the CCP persists in adding to the death in Ukraine, sanctions on Russia should become—very broadly—secondary sanctions on China’s entire economy.

Democracy advocates around the world who face the threat of death from China’s drones are calling in vain, so far, to convince the West and its allies to impose no-fly zones and trade embargos on China’s deadly drone exports and kill zones.

Inaction, passivity, and silence in the West are culpability in the face of injustice and war crimes, including the deaths of thousands of civilians in Ukraine. If allowed to spread, those war crimes could come to a neighborhood near you in the coming years if our politicians keep taking the easy path that avoids confrontation with Beijing.

It is better to act now against dictators and their drones while we still can. At some point, the power, sophistication, and coordination of China’s growing drone armies could overwhelm Western defenses entirely. Then it will be too late to resist.