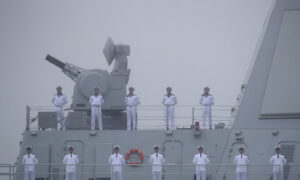 [xtypo_dropcap]T[/xtypo_dropcap]hough it took three years of bureaucratic wrangling to get China’s new Social Insurance Law passed on Oct. 28, commentators and citizens are skeptical that it will lead to any real changes.

Prominent Chinese social economist He Qinglian does not feel optimistic about practicality of the law, and a number of ordinary Chinese see it as partly deceptive, partly irrelevant, and in any case, too costly to begin with.

The new Social Insurance Law covers a number of areas, including the gradual implementation of pension budgeting on a national level, insurance fund budgeting on a provincial level, a reform of the pension system of government departments, encouraging individual pension accounts, and an extension of pensions throughout provinces.

He Qinglian argues that the Chinese regime is trying to standardize China’s social security system by using the legal system. However, China is not a country where laws and regulations are actually enforced. In the past various places in China always had similar regulations and laws related to social security and insurance, but the result was an “empty account” phenomenon.

“The so called empty account is when someone has a social security account, but there is no money in it. Even in more developed cities like Shanghai, there have persistently been instances where government officials embezzled large amounts of money from social security accounts,” she said. “The total sum of these empty accounts exceeds 1 trillion yuan (approximately US$150 billion).” Ms He added that since these statistics are a few years old the current problem is likely much worse.

Though Chapter 2, section 18, of the Social Insurance Law states that the pension fund will be adjusted according to the growth of average wage and commodity inflation, Ms. He said that the actual relative increase is very low. First of all, the inflation index published by the Chinese regime is much lower than the actual numbers. (For example, economists estimate inflation to be over 10 percent, but the number published by Beijing is only 3.6 percent.) Secondly, the official consumer index is also much lower than the actual rate.

Ms. He also rhetorically asked that if the current social security system is not being implemented, “what’s the point of improving legal regulations?” In the past few years, there have been twenty cases of embezzlement of social security funds resulting in the disappearance of a few hundred billion yuan. The money was never recovered.

She emphasized that the real issue is how to resolve the previous empty debts, stop corrupt officials from embezzling social security funds which they use to invest in stock and real estate markets, and stop the authorities from doing secret deals to make a profit.

That is unlikely to happen, she says. “From the 1980’s to the present, every year a document is issued forbidding the children and relatives of leading cadres from conducting business. The wording is all similar. But which leading cadres’ children are not doing business? The Labor Law, too, stipulates no more than 12 hours overtime a week, but which area follows this law?” she asked.

Accordingly to Beijing human rights lawyer Ni Yulan, her husband who retired in 2003 gets only 2,000 yuan (about US$300) retirement pension each month. Their utility payments alone take about one third of the monthly pension. His pension is barely enough to cover two weeks of living expenses.

Ms. Ni feels that the social security law was passed to mislead people inside and outside China about the country’s progress, while people such as herself, who need Social Security, cannot benefit from it: “There are many homeless people and many beggars. People are angry! Our safety cannot even be guaranteed, not to mention pension insurance. People cannot even afford food, where are they going to get the money to pay for insurance?”

Shanghai resident Shen Peilan gets 1,900 yuan (about $287) retirement pension per month. With soaring prices and the added responsibility of taking care of her elderly relatives, she is barely coping. “The price of vegetables is several times higher than before, the cost of utilities, water, electricity and oil have all increased, so four or five hundred yuan is spent on basic necessities. It costs over 10 yuan if we take a long trip on the subway. Fast food used to only cost 3 or 5 yuan for each meal, now it costs at least 10 yuan. It’s now become too expensive for us to go out.”

Shen Peilan said that in order to save money, she and her family go directly to the pharmacist to buy medicine, as they only get a little over 1,000 yuan in medical subsidies per year from the government. “It costs several hundred yuan if you visit the hospital for a minor illness; how many trips can a mere 1,000 yuan cover?” Ms. Shen said that people she knows in their fifties often do not bother to visit the doctor when they have a minor illness. If they get a major disease, she said, they often simply wait to die.