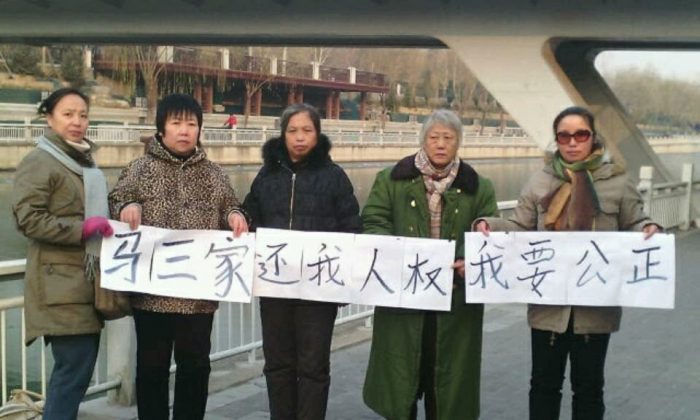 In response to enormous pressure from inside and outside China, the Communist Party last year made it official: it was going to abolish the system of re-education through labor camps that it has used to punish dissidents since the 1950s.

But if it wanted that to be the end of the story, victims have something else in mind. They’re using the decision, and the labor camp closures, to argue for compensation for the abuses they suffered in the past.

Most prominently, in the past week former detainees from the Masanjia Women’s Forced Labor Camp, one of the most brutal in China, have launched a petition campaign, online and on foot, calling for their abuses to be redressed.

The name Masanjia gained international notoriety in 2012 when a woman from Oregon found a note from an enslaved labor camp worker slipped into her box of graveyard-style Halloween toys. Astonished and shaken, she took the letter to the press.

“Sir: If you occasionally buy this product,” it said in imperfect English, “please kindly resend this letter to the World Human Right Organization. Thousands people here who are under the persicution of the Chinese Communist Party Government will thank and remember you forever.”

The note continued: “People who work here have to work 15 hours a day without Saturday, Sunday break and any holidays. Otherwise, they will suffer torturement, beat and rude remark.”

Before the bout of publicity triggered by the letter, abuses in Masanjia had been going on for over a decade. Most heavily targeted were practitioners of Falun Gong, a spiritual discipline that is persecuted by the Chinese regime. A striking variety of cruel torture methods were devised and deployed on victims, before being disseminated to the labor camp system across China and used on other detainees.

Word that Masanjia was being shut down trickled out in recent months. A CNN reporter visiting the camp in late October referred to it as “empty,” with no guards, and no prisoners. Minghui, a Falun Gong website, also reported its imminent closure in August last year.

A range of victims have now stepped forward and attempted to sue for compensation.

Chinese Human Rights Defenders recorded the case of Zhu Guiqin, a petitioner who traveled to Beijing on Dec. 30.  She was intercepted, searched, and sent back to Fushun city in Liaoning.

A group of victims from Liaoning, where Masanjia is located, traveled to Beijing in mid-December to protest.

Hao Wei, one of the victims, told New Tang Dynasty Television: “We originally planned to go to court instead of petitioning, but the court didn’t place the case on file.”

Hao has joined together with three other victims, and they posted their “announcement for request of compensation” online.

They question the grounds for their being detained, and say the conditions of their detention violated even China’s official laws on how labor camp detainees should be treated.

The response from the Chinese regime has been to stonewall and send the complainants through its bureaucratic labyrinth.

“We went to several justice departments to petition, but they told us that they don’t acknowledge the media report about Masanjia earlier this year,” Hao said. “They said it was the Liaoning government’s responsibility.” The justice department, which sits under the local government, administers the labor camps.

Jiang Tianyong, a civil rights lawyers who has for years worked on cases brought by victims of the Communist Party’s domestic security system, said that the Party’s system of “stability maintenance,” which justified the use of labor camps, has been consistent throughout the system.

“Local departments have always followed the orders from the Politics and Legal Affairs Committee at the center,” he said.

The efforts to call attention to abuses and gain compensation are helpful anyway, said Renee Xia, the international director at Chinese Human Rights Defenders, a grassroots NGO, in a telephone interview.

“It’s good for those cases if they can push through and try different ways and to get attention and see how the government responds,” she said.

She recalled an anecdote — not to be taken as a statement of policy — about a petitioner being told by a local policeman, on the subject of compensation: “Don’t even think about it, we have an order from above, we’re not going to give any labor camp victims compensation.”

Xia said: “Who knows if there’s a higher order or not. People should just keep pushing.”