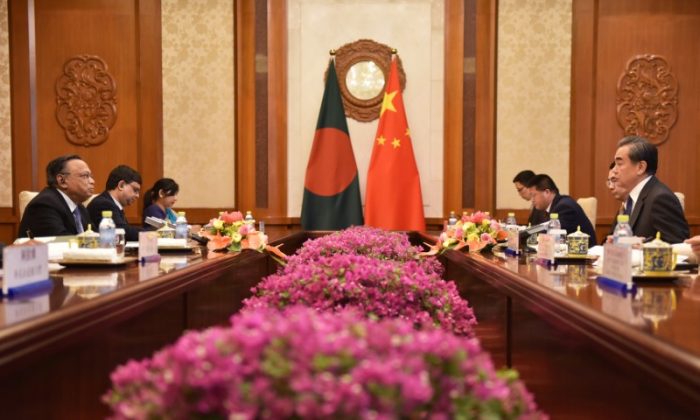 China has called on Bangladesh to “uphold independence” and reject “bloc politics,” particularly those led by the United States that Beijing characterized as U.S. “centrism and exceptionalism.”

The Chinese Foreign Ministry issued a statement on June 2 following a meeting between Director-General of the Department of Asian Affairs Liu Jinsong and Bangladesh’s Ambassador to China Mahbub Uz Zaman at which they discussed bilateral relations and regional issues.

During the meeting, Liu criticized U.S. Secretary of State Antony Blinken’s May speech on China for reflecting “serious deviations in the United States’ view of the world and view of China and China-U.S. relations.”

“The logic behind the U.S. Indo-Pacific strategy, AUKUS, the Quad grouping, and the latest Indo-Pacific Economic Framework is U.S. centrism and exceptionalism,” he said.

Liu further noted that the U.S.-led initiatives “will only bring disgrace to itself, and at the same time undermine the regional cooperation framework and create bloc confrontation.”

“Unipolar hegemony wins no support, block confrontation has no future, and building ‘small yards with high walls’ and decoupling from or cutting off supply chains will bring no good to anyone,” he said.

“China believes that countries in the region, including Bangladesh, will bear in mind the fundamental interests of their own countries and the region, uphold independence, reject the Cold War mentality and bloc politics, safeguard true multilateralism, and defend the hard-won environment for peace and development in the region.”

In response, Zaman reaffirmed that Bangladesh opposes bloc confrontation and a “new Cold War” but maintains its stance of “friendship to all, malice to none.”

Blinken stated in his May 26 speech on the U.S. approach to China that Washington is not seeking “a new Cold War” or to prevent China from becoming a major power, but rather to preserve international law.

“We stand ready to increase our direct communication with Beijing across a full range of issues. And we hope that that can happen. But we cannot rely on Beijing to change its trajectory,” Blinken added.

This was China’s second attempt to warn Bangladesh against joining U.S.-led alliances, the first being in May 2021, when the Chinese envoy warned that Bangladesh’s bilateral relations with China would suffer “substantial damage” if it joined the Quad.

The Chinese envoy said that Bangladesh “will not derive any benefit” from joining the four-nation alliance—which consists of the United States, India, Japan, and Australia—calling it a “narrow-purposed geopolitical clique.”

However, Bangladeshi Foreign Minister A.K. Abdul Momen rebuked the Chinese envoy’s remarks and claimed that Bangladesh is an “independent and sovereign state” that can decide its own foreign policy.

Momen described the Chinese regime’s warning as “unusual” and “aggressive,” adding, “We didn’t expect such behavior from China.” He further noted that the Quad has not reached out to Bangladesh to propose joining the alliance, raising questions as to why the Chinese envoy made such “premature” remarks.

Bangladesh joined Beijing’s Belt and Road Initiative in 2016, at the risk of falling victim to its debt-trap diplomacy and losing strategically important ports on the Bay of Bengal to China, which would give the Beijing regime access points to the Indian Ocean.