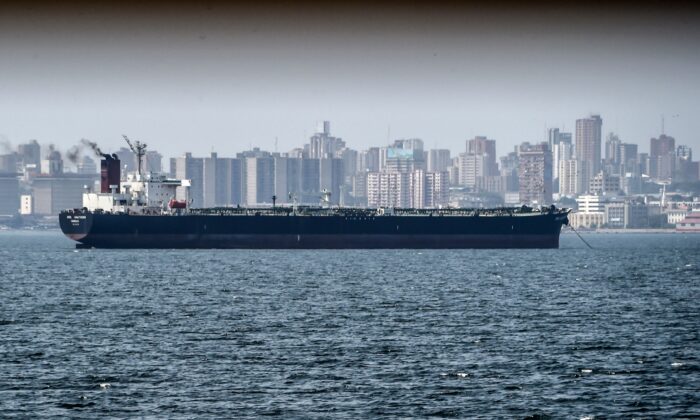 An oil tanker remains at the Maracaibo Lake in Maracaibo, Venezuela, on March 15, 2019. (Juan Barreto/AFP via Getty Images)
Thinking About China

China Busts US Sanctions on Venezuela—and America Says Nothing

China is thumbing its nose at U.S. sanctions on Venezuela and Iran; so far, the Biden administration does nothing about it. According to Reuters, China is now using front companies—at least one unregistered and another a major defense contractor—to run illegal oil from Venezuela to the mainland.

Starting in August 2019, China National Petroleum Corp (CNPC) honored the U.S. sanctions due to fears of secondary sanctions that would affect its global operations. But the oil kept flowing via smaller Chinese companies that transshipped in Malaysian waters, and then falsely labeled the crude “Malaysian” before receiving it in China.

The Chinese Communist Party’s (CCP) latest scam is to evade secondary sanctions on its companies by using an unregistered company and a major defense contractor to ship the oil directly, without transshipment.

The Malaysian fig leaf has thus dropped, and China boldly flouts U.S. sanctions and issues foreign ministry press statements against them to boot.

According to Reuters’ sources, written up by reporters Chen Aizhu and Marianna Parraga, “Since November 2020 China Aerospace Science and Industry Corp (CASIC) has been carrying Venezuelan crude on three tankers it acquired that year from PetroChina, CNPC’s listed vehicle.”

To add insult to injury, the Chinese tankers keep their transponders on while loading the oil, at least 13 cargos totaling 25 million barrels ($1.5 billion), which allows the world to see that China flouts the U.S. sanctions.

PetroChina also provided a tank farm in Ningbo where CASIC receives and stores the contraband deliveries.

“All Venezuelan oil cargoes received by CASIC were originally picked up at the Jose port by Cirrostrati Technology Co Ltd, a firm with no track record in oil trading, acting as [an] intermediary for only these cargoes, according to PDVSA [Venezuela’s state-owned oil company] schedules,” according to Chen and Parraga. “Reuters could not find the company’s registration or incorporation information.”

According to Reuters’ paraphrase of one source, CASIC “was picked for the oil job because it is politically powerful and has limited global financial exposure, making it less vulnerable to sanctions.”

The Venezuelan and “Malaysian” oil is marketed at discounts of between $8 and $30 per barrel to independent refiners in China that also lack significant exposure to international markets and, therefore, are relatively invulnerable to secondary sanctions, according to Chen and Parraga.

In what amounts to an admission of guilt, one refinery executive from China told Reuters that the openly Venezuelan oil “is more costly, but it’s good that the government is now taking charge of these Venezuelan supplies, which saves us lots of logistics headaches and sanction-related risks.”

According to Bloomberg, China purchased 53 percent more Iranian and Venezuelan oil in 2021 compared to the prior year, likely because of the discounts they offered due to sanctions and the resulting lack of markets elsewhere.

While China’s foreign ministry attempts to portray the oil-running as “humanitarian,” the Venezuelan proceeds actually never leave China. They go from one Chinese bank account to another, to either pay down $50 billion in debt that a Venezuelan dictator, Hugo Chavez, contracted in 2007, or to pay for the substandard COVID-19 vaccines that China unloaded on Caracas during the pandemic.

The sanctions thus punish lesser rogue nations, but America’s failure to enforce them actually strengthens the world’s most powerful rogue, the CCP.

“Chinese buyers, particularly private refiners, have benefited from Washington’s tough line on Iran and Venezuela, continuing to buy their oil long after their counterparts elsewhere in Asia ceased purchases,” according to Bloomberg. “The risk that non-U.S. entities may lose access to the U.S. financial system or have their American assets frozen if found guilty of breaching the sanctions hasn’t dissuaded them.”

US Treasury Should Strengthen Enforcement

The Venezuelan and “Malaysian” oil cargos originated in Venezuela—both types of cargo are sanctioned, and both CASIC and CNPC are Chinese state-owned enterprises. So failing to sanction CNPC—because of a web of legal technicalities invented in Beijing to be purposefully confusing—is an American excuse to do nothing.

But with this latest strategy of open import of sanctioned oil, the CCP is publicly challenging America’s right to sanction rogue states like Venezuela.

America could and should respond by strengthening enforcement, for example, by imposing secondary sanctions against CNPC, PetroChina, or China as a whole, which are the obvious beneficiaries of the CCP’s illegal sanctions-busting.

Two of the CASIC vessels are due in China by September and could theoretically be interdicted by U.S. Coast Guard vessels en route. The United States could then sell the contraband oil on the open market to pay for the support of real democracy in Venezuela.

But when reached for comment by Reuters, the U.S. Treasury Department didn’t even provide a comment. At the very least, Treasury should have denounced China for breaching the sanctions. But we got nothing.

If America and its allies do not take enforcement action against China’s sanctions-busting, the world will notice and we will be seen, with abundant justification, as how Beijing wants us to be seen: a paper tiger.