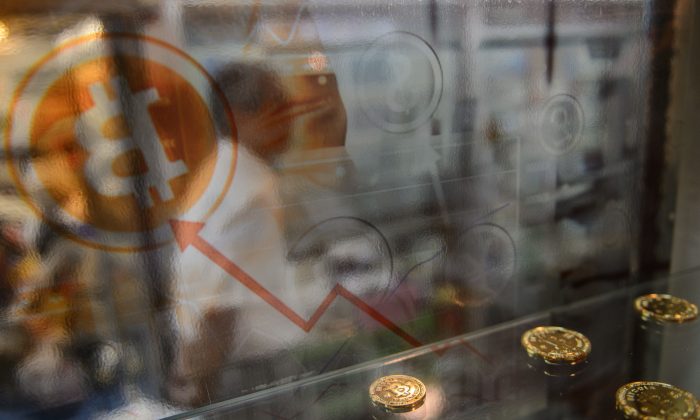 A Bitcoin display at a store window in Hong Kong on Aug. 13, 2016. (Anthony Wallace/AFP/Getty Images)
China

China was like the Wild West for the electronic currency Bitcoin. As China took first place in producing and trading bitcoins, Chinese could do whatever they wanted with it.

Margin trading, funneling money out of the country—everything was possible. Only financial companies were barred from using it within their systems. Trading domestically was even free of charge.

Not anymore. After Chinese citizens overplayed their hand by evading capital controls and transferring yuan abroad via bitcoins, the regime has come down hard on the exchanges since the beginning of the year.

“Regulators have noticed that some bitcoin platforms crashed during the recent market volatility, causing some investors, particularly those trading with leverage tools, to bear huge losses because they were unable to log on to the website during the sell-off,” the official China Securities Journal reported earlier in January.

For good measure, China’s central bank, the People’s Bank of China (PBOC), launched an investigation into the biggest exchanges—BTCC, Huobi, and OKCoin—looking for market manipulation, money laundering, and the like.

Even though the official investigations didn’t lead to indictments or regulatory orders, the exchanges have since made major changes. They have restricted trading on margin or using leverage, and most recently introduced trading fees to cool the booming market.

“In order to maintain market stability, we may pause the new leverage services at any time according to market fluctuations and our risk control systems,” Huobi stated on its WeChat page.

Whether these measures prove to be effective to prevent Chinese from using bitcoins for gambling or for capital flight remains to be seen. Speculators should not underestimate the heavy hand of the regulator, however, as China could take extreme measures, like nationalizing exchanges—or banning Bitcoin altogether.